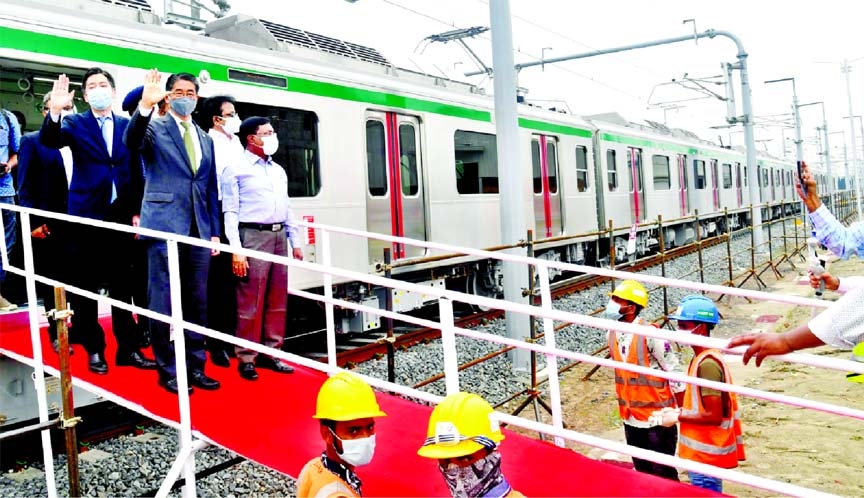 The first six cars of the Dhaka metro rail mark their first media exhibition with a short debut trip at the Diabari (Uttara) depot in the capital on Tuesday.

After a long journey from Japan to India, the first six cars of the Dhaka metro rail have marked their first media exhibition with a short debut trip at the depot in Uttara's Diabari.
On Tuesday, the cars made their way along the depot's unloading area at a leisurely pace in front of top officials from the joint Bangladesh-Japan project and members of the media. Â
"About 64 percent of the overall work on Bangladesh's first metro rail project is complete," Road Transport Minister Obaidul Quader, the chief guest at the event, said in a video conference.
Constructors have finished 85 percent of the Uttara to Agargaon section and 60 percent of the Agargaon to Motijheel section, while more than half of the work on the electrical-mechanical system, rolling stock and procurement of depot equipment is complete.
The minister said that land development for the depot had been completed within nine months and had cost the government Tk 705.8 million. About 14.49 km of the planned 20.10 km of metro rail viaduct have been constructed and rail tracks have been laid on about 10 km of the line.
Performance tests will begin on the mainline of the viaducts before the end of the year, Quader said.
Though the metro rail project had initially targeted 2024 as its completion date, the MRT-6 section of the project, spanning from Uttara to Agargaon, was moved forward to 2021 at the order of Prime Minister Sheikh Hasina.
The pandemic is likely to be a major setback to work, said Road Transport and Highways Secretary Md Nazrul Islam.
"We are truly honoured to be a part of this milestone in Bangladesh's dream project," said Japanese Ambassador to Bangladesh Ito Naoki, who attended the event as a special guest.
"There has been extraordinary progress on the project despite the COVID-19 epidemic," he said, extending his sincere thanks to all involved.
The metro rail will be able to cut down the time needed to travel from Uttara to Motijheel from 100 minutes to just 35, he said.