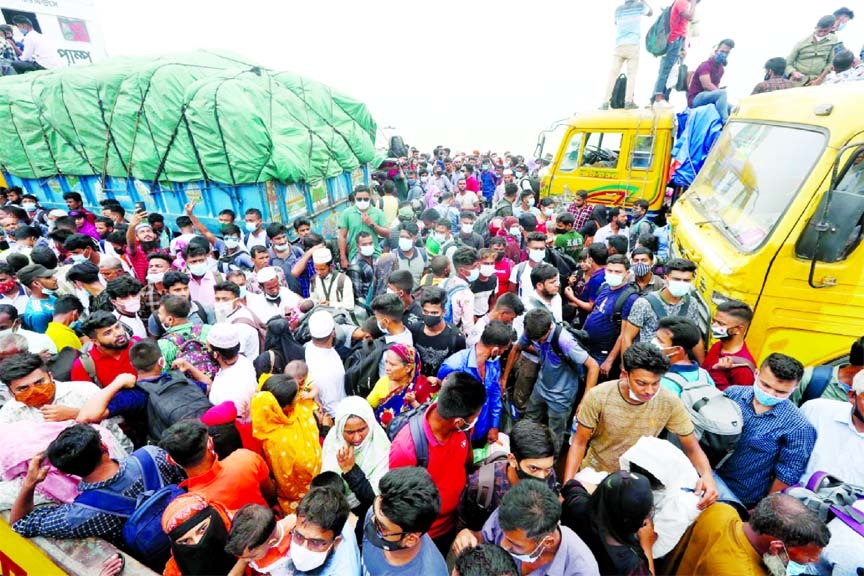 Homebound passengers scramble to get on board a ferry dangerously ahead of Eid holidays at Shimulia Terminal in Munshiganj on Tuesday despite the ongoing pandemic lockdown.

Thousands are crossing the Padma River in a mad rush to reach home for the upcoming Eid-ul-Fitr holidays amid the coronavirus pandemic.
People packed the ferries, braving the scorching heat and the rain on Tuesday. Â
The government has halted launch and speedboat service as part of an effort to limit the coronavirus pandemic, leaving ferries the only mode of transportation for many Eid returnees.
Although authorities had previously suspended daytime ferry services, they were forced to walk back the decision due to the huge influx of travellers, according to Bangladesh Inland Water Transport Corporation, or BIWTC.
"The pressure has increased in recent days. The bar on ferry services has been lifted. Of the 16 ferries we have here, 15 are now in operation," said AGM Md Shafiqul Islam of BIWTC Shimulia pier.
People are continuing to crowd the ferry terminal at Shimulia and are trying desperately to board the vessels, putting their lives at risk to go home.
There were massive crowds at the terminal over the last few days and the rush only increased on Tuesday. The shutdown of public transport has not prevented people from spending extra money to find alternate means to make it to the port.
The checkpoints set up by the law enforcers and paramilitary forces have been unsuccessful in limiting.
Police said vehicles could not cross on the ferries until 3 am on Tuesday due to the size of the crowds.
"The influx of people cannot be stopped. However, every effort is being made to curb the spread of the infection. As many as 87 launches, about 450 speedboats and 200 trawlers used to operate along the Shimulia-Banglabazar route. Currently, only 15 ferries are in operation," said Munshiganj DC Moniruzzaman Talukder.