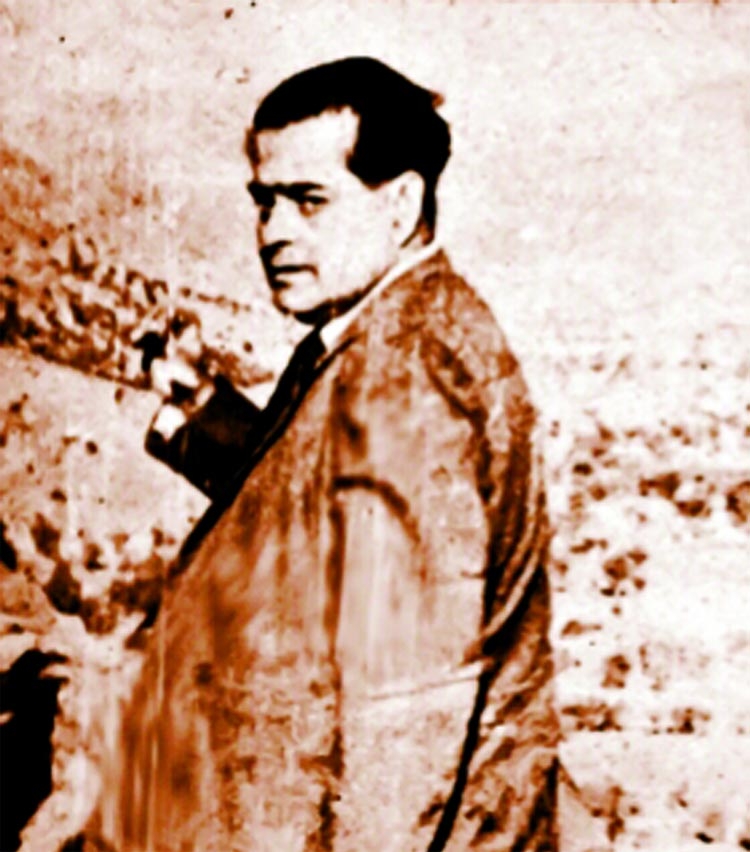 Tofazzal Hossain Manik Mia was born in 1911 in Bhandaria village of Pirojpur district. After accomplishing a life-long struggle for democracy and independence, this legendary political journalist died in June 1969. Today is the 52nd death anniversary of Manik Mia- an undisputed ardent patriot and political activist in the history of East Pakistan. We commemorate the death of this proud hero with the deepest love and reverence.
After being a distinguished graduate, Manik Mia started working in the civil court of Pirojpur district. During his service, once he got a chance to get close to Muslim League leader - Huseyn Shaheed Sohrawardy. At one stage, leaving his job he joined the Provincial Muslim League as office secretary in Calcutta. Soon after he felt an acute need for reaching political publicity and propagation to the mass people. So, he became minutely associated with the media through the 'Ittehad' published in 1946.
In 1948, the majority of Bengalis in East Pakistan took to the streets to demand their mother tongue- Bengali. Due to this language movement, the Bengalis' fascination with Pakistan began to wane. The East Pakistan Awami Muslim League was originated in 1949 as an opposition organisation to the Muslim League. In the same year, the weekly Ittefaq emerged as the newsletter of this political party. MawlanaAbdul Hamid Khan Bhasani became the official editor of the newspaper. From August 1951, Manik Mia took over the responsibility of the newspaper. In 1953, the weekly Ittefaq was converted into the daily Ittefaq under his editorship. At that time, the daily Ittefaq played a substantial role in the movement against Ayub Khan's military tenure and aided in the collapse of the Muslim League in the 1954 general election.
Manik Mia used to write a regular sub-editorial under the pseudonym of 'Musafir' to make the voice louder against the exploitation and oppression of the Pakistani regime. His fearless truth-telling, unique political injunction, and love for the masses won the hearts of the millions. His writing was a stimulating agent to resist subjugation and exploitation. Being influenced by his writings, students got the inspiration of the movements and mass-people became aware of their political rights. Subsequently, he was sentenced in 1959 to one-year imprisonment for violating martial law. In 1963, he was arrested again and at the same time, the publication of the daily Ittefaq was banned and the New Nation Printing Press was confiscated.
As Manik Mia was a bosom political fellow and avid disciple of Huseyn Shaheed Suhrawardy - one of the pioneers of democratic politics- he adopted patriotic political ideology, formidable courage and heroism, the reasoning of thought, and the eloquence of expression - everything befittingly.
Not just writing columns, but Manik Mia's unwavering supports for the historic six-point movement was thoroughly obtained. His firm attitude was always uncompromising. Since he was a follower of progressive politics, till death, he worked tirelessly for the dream of liberating the masses from political exploitation and suppression. He was a brilliant example of objective journalism. Due to his condensed passion for democracy, the military government confiscated his property and even ruined it.
He had been clamorous against the anti-people promptness of the Pakistani rulers. Manik Mia started writing columns against Pakistan's political recklessness, inequality, deprivation, and aggression against the Bengali language. He considered political and social responsibilities to be inseparable and thus became well-accepted for practicing progressivism on behalf of the people in the era of Muslim League domination.
Manik Mia was an uncompromising devoted journalist. He used his mighty pen to establish the rights of the people and did not merely praise the party. Manik Mia's idea about politics was distinct indeed. He was a politician but did not do party politics anymore. The Bengali nationalist ideology-based entire political parties on the track of democratic struggle got his undaunted support. He had adopted the philosophy of self-sacrifice for democracy and independence and was guided by a set of unparalleled principles and unique conscience. The feeling of his bona-fide love for people was profound. Therefore, Manik Mia was considered a political preceptor and a place of trust and reliance for many.
Manik Mia has active role in the six-point demand movement announced by Bangabandhu in 1966 and played a pivotal role. He was an ideal companion of Bangabandhu and sincere associate of the movements and struggles. Manik Mia was actively involved with every anti-colonial political movement throughout his whole life. He also refueled the Movement of 1948-49, State Language Movement, Six-point Movement of 1966, the mass uprising of 1969, and unmasked the dictatorship with his patriotic inclination. For unleashing the political criticism of the persecutory regimes his pen was undoubtedly perfect. That is why, in his lifetime, he was turned into a trailblazing journalistic embodiment and a prominent democratic figure.