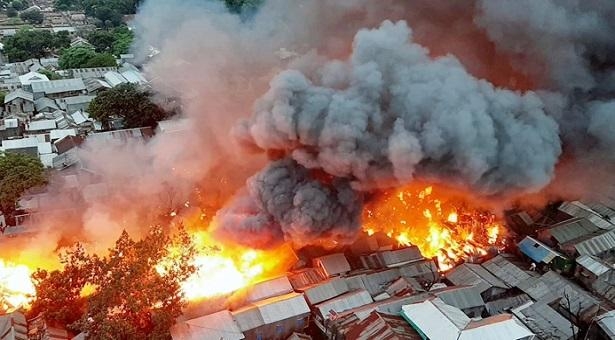 Over 100 shanties were gutted in a fierce fire at a slum in the cityâs Mohakhali area early Monday.
Quamrul Ahsan, duty officer at the Fire Service and Civil Defence Headquarters control room, said the fire broke out at âSat Tala Slumâ around 3:57 am and it soon engulfed the entire slum area.
On information, 18 firefighting units rushed to the spot and extinguished the blaze around 6:35 am.
While briefing reporters on Monday morning, Brig Mohammad Sazzad Hossain, Director General of Fire Service and Civil Defence, said the fire might have originated from an electric short circuit or any illegal gas connection.
âThereâre many tin-roofed houses in the slum â¦thatâs why the firefighters had to struggle a lot in putting out the fire. Over 100 shanties were gutted,â he said.
However, there was no casualty in the incident.
Replying to a query, Brig Sazzad said, âThe fire spread so fast due to the existence of explosive substances in the slum.â
A four-member probe body is expected to be formed to probe the incident, he said.