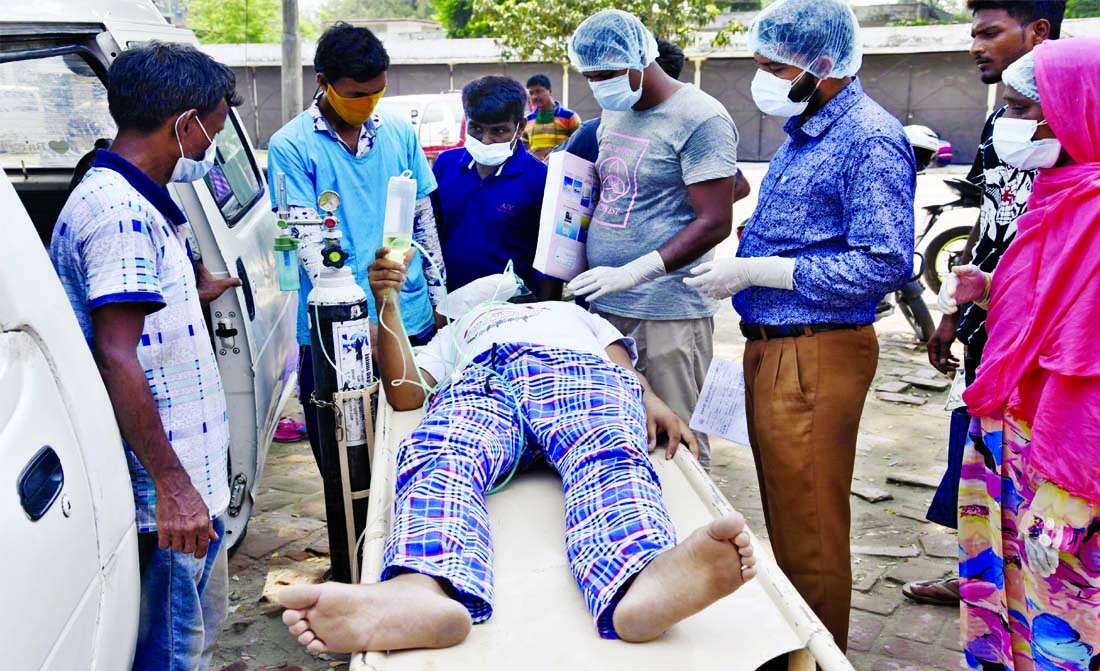 With Oxygen support, a critical Covid patient is being taken to the Rajshahi Medical College and Hospital (RMCH) on Tuesday amid surge in coronavirus cases in Rajshahi Division.

Rajshahi has recorded a higher tally of COVID-19 cases than Dhaka and Khulna over a 24-hour period as it emerged as a new hotspot for the coronavirus pandemic in Bangladesh.
The district saw 673 new cases compared to 544 in both Dhaka and Khulna, according to the latest government data released on Tuesday.
Dhaka still has the highest overall caseload of 9,004 followed by Rajshahi with 4,137.
Rajshahi also tied Dhaka for the most deaths from the illness in the last 24 hours with 11 fatalities. Chattogram registered seven deaths followed by Khulna's six and Rangpur's five.
Rajshahi has been dealing with a marked spike in COVID cases over the past few days. The positivity rate of the 386 coronavirus tests conducted at two labs at Rajshahi Medical College and Hospital was 45.07 percent on Monday, as 174 people tested positive. The positivity rate for tests was 41.29 percent on Sunday, 50.27 percent on Saturday and 49.43 percent on Friday.
The district authorities are currently enforcing indefinite restrictions on people's movement and economic activity to contain the virus. As part of the curbs, shops and stores will be closed after 5 pm from Friday. Mobile courts and political leaders are also working to enforce restrictions on the streets.
Besides, Bangladesh has recorded 2,322 new COVID-19 cases, the highest daily count since Apr 29, taking the tally of infections to 815,282.
The death toll jumped to 12,913 after 44 people died from the illness in a 24-hour count, the most in a month, according to the latest government data released on Tuesday.
Another 2,062 people recovered from the coronavirus infection at home and in hospital care during that time, bringing the total to 755,302.
As many as 19,165 samples were tested across the country in the last 24 hours, yielding a positivity rate of 12.12 percent.
The latest official figures put the recovery rate at 92.64 percent, while the mortality rate stands at 1.58 percent.
Meanwhile, eight more Covid patients died in the past 24 hours at Rajshahi Medical College and Hospital (RMCH), health officials said on Tuesday.
"Of the deceased, three had tested positive for Covid-19. Among them, two hailed from Chapainawabganj district and one belonged to Rajshahi district," said Deputy Director of Rajshahi Medical College and Hospital (RMCH), Saiful Ferdous.
The remaining five who died at the hospital in the past 24 hours, showed symptoms of Covid, he said. Of them, three hailed from Rajshahi, and the remaining two belonged to Chapainawabganj and Pabna districts, respectively.
In the past 24 hours, 33 patients have been admitted to the corona unit of the hospital. Of them, 16 are from Rajshahi, 14 from Chapainawabganj, one from Naogaon, and two from Natore district.
With the fresh patients, a total of 257 people are currently undergoing treatment at the hospital.
Overall, 71 people have died in Rajshahi division since June 1, reports UNB.
The hospital is literally struggling to accommodate the rising number of Covid patients, officials said.