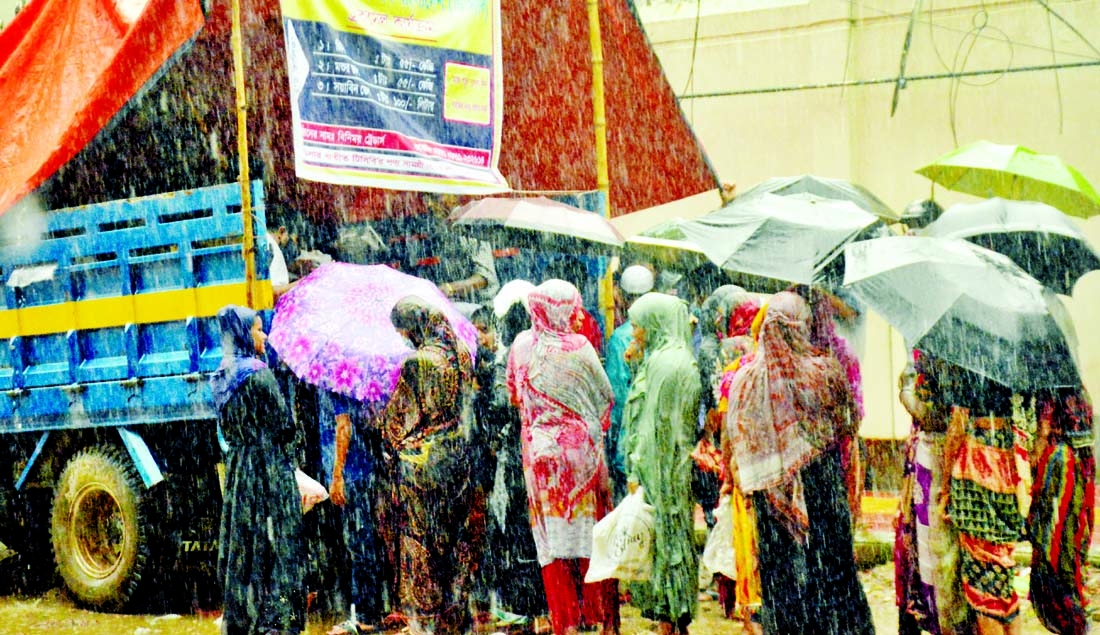 Defying heavy downpour, people of limited income group standing in a long queue to buy essentials from the truck of Trading Corporation of Bangladesh (TCB) in front of Jatiya Press Club in the city on Wednesday.

Syed Shemul Parvez :
Passengers are being crammed into the buses in the city, even though they pay 60 percent additional fare.
Most of the passengers and transport workers are not obedient to instructions of corona hygiene including the use of masks and sanitizers.
Public health experts have urged to increase surveillance to ensure hygiene in public transports.
After being closed for about one and a half months, public transports were permitted to ply on the condition of complying with the corona health code, but no condition is being complied by both transport workers and passengers.
It seems that most of the passengers are reluctant to use a mask during the journey; even there is no mask on the face of the driver, assistant and helper of the bus.
Passengers are not being picked up in any bus by disinfecting their hands.
It has been seen on the spot that even though more than 60 percent of the fare is collected; the passengers are being picked up and crammed into the buses.
People are getting on the bus risking their lives as usual without caring about the physical distance.
On the spot when contacted with a passenger named Roney Ahmed, he told the New Nation that actually they have become bored of using mask every day. Besides, just see the bus, are the transport workers maintaining government guidelines properly?
Despite sharing my seat with another I have to pay 60% extra fare. If we protest against taking extra fare, bus staff says us it's the order of government. So no compromise in bus fare, he added.
When asked, a transport worker about the allegation of passengers said, we generally refuse picking up the passengers into the bus, but they don't listen to us.
Then why do you take 60% more extra fare as your bus is full of passengers, he said every bus takes 60% extra fare, so we are also taking extra fare. Besides, it's the order of government.Â Â  Â
Public health expert MA Aziz said that if the hygiene rules are ignored in public transports, the corona infection may increase again.
Now the infection rate in the capital is low. If hygiene is not followed then the situation can be terrible again, he added.
Meanwhile, considering the risk of corona infection, the DGHS (Department of Health) has extended the ongoing lockdown till June 16.
On Wednesday, about 36 more people died from coronavirus in Bangladesh in the past 24 hours, taking the death toll to 12,949.
During the period, 2,537 more people were diagnosed with the virus, raising the total infection to 8,17,819, the health directorate said in a press release on Wednesday.