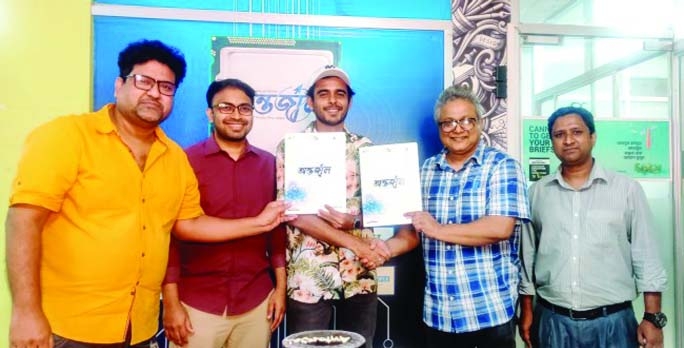 Entertainment Report :
Popular actor Siam Ahmed signed a new movie titled Antorjaal, directed by Dipankar Dipon. The movie is being called the first cyber-crime thriller in Bangladesh.
With the initiative of the ICT Division, the movie is produced under the banner
of Motion People Studios.
Siam Ahmed is set to play the lead character Lumin, a young computer programmer based in Rajshahi. The actor signed the contract recently at an event organised by the production house. Producers Mohammad Ali Haider, Sadekul Arefin and co-producer Shah Amir Khasru were present at the event along with other cast and crew members of the team. The shooting of the movie is scheduled to start on June 24 in Dhaka.
While talking about the movie its director Dipankar Dipon said, âWe have been working on this project with the ICT Division since November 2019. Asha Zahid and Saifullah Riad worked with me to develop the screenplay and the script. We tried to highlight complex aspects of cyber technology and we aim to raise awareness about cyber activities.â
Phases of the movie will be shot outside the country. Due to the Covid-19 pandemic, the location is not yet selected, he also said.