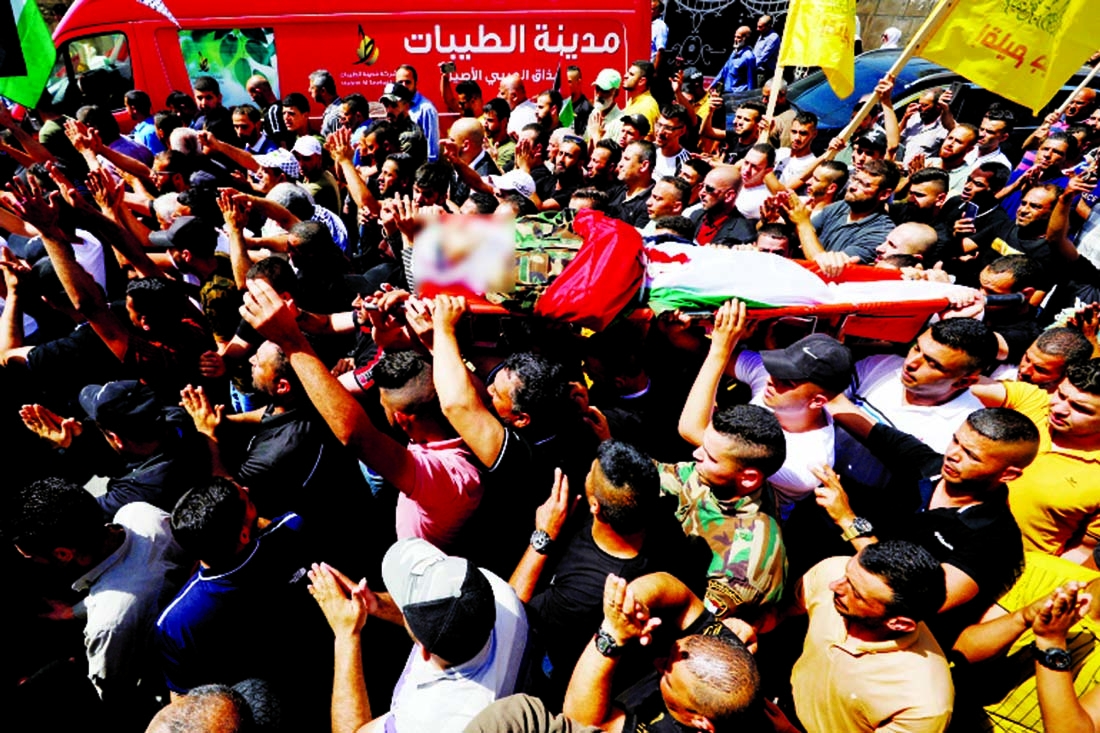 Mourners carry the body of Tayseer Issa, who was killed by Israeli forces in Jenin on Thursday.

Al Jazeera :
Israeli forces have shot dead at least three Palestinians, including two Palestinian Authority (PA) military intelligence officers, in a predawn raid in the city of Jenin in the occupied West Bank, Palestinian authorities said on Thursday.
The Palestinian health ministry identified the two officers as Adham Yasser Alawi, 23, and Tayseer Issa, 32, the Palestinian Wafa news agency reported, adding the third victim was Jamil al-Amuri, who had been imprisoned in Israeli jails.
Another Palestinian officer, Muhammad al-Bazour, 23, was critically injured during the Israeli undercover mission and has been moved to an Israeli hospital, according to Wafa.
An online video The Associated Press had access to appears to show Palestinian officers taking cover behind a vehicle as gunshots are heard in the background. One shouts that they are exchanging fire with Israeli "undercover" forces. Relatives of Palestinian security officer Tayseer Issa in the mortuary of Jenin [Alaa Badarneh/EPA]
Israeli media reported that al-Amuri was a former prisoner and member of the Palestinian Islamic Jihad, but this has yet to be confirmed from the Palestinian officials.
Reporting from occupied east Jerusalem, Al Jazeera's Harry Fawcett said the incident was "an undercover operation in a civilian vehicle." "The understanding is that they (Israeli forces) were targeting at least one member of the Palestinian Islamic Jihad.
"One guy was killed in that operation, and another was injured and taken away by the Israel forces. The man who was killed is understood to be a member of the PIJ," said Fawcett.
According to reports, the second man who was taken away was a Palestinian man named Wissam Abu Zaid. He was reportedly arrested during the operation.
Thousands of mourners turned out on the streets in Jenin city to take part in the funeral procession of Alawi, as preparations for the burial of the two other men killed were also underway.
There have also been calls for a general strike across Palestinian towns.
A spokesman for Palestinian President Mahmoud Abbas condemned what he called a "dangerous Israeli escalation", saying the three were killed by Israeli special forces who disguise themselves as Palestinians during arrest raids.
The spokesman, Nabil Abu Rudaina, called on the international community and the United States to intervene to halt such attacks.
There are conflicting reports about the details of the incident.
The Israeli military and police did not immediately respond to requests for comment. However, an Israeli official anonymously told Reuters news agency that the Palestinian officers were killed in the crossfire.
"Witnesses on the ground say the Israeli forces also fired at members of the Palestinian military intelligence - officers who were there near the scene, outside their own security building," Al Jazeera's Fawcett said.
"Israeli media reports talk about the Israelis returning fire in their direction but whatever took place, it is known that two of those military intelligence officers were killed and a third was critically injured and taken to an Israeli hospital as a result.
"This is another instance of Palestinian military intelligence officers being killed by Israeli forces in the occupied West Bank," he added.
Under interim peace agreements signed in the 1990s, the PA has limited autonomy in scattered enclaves that together make up approximately 40 percent of the occupied West Bank. Israel has overarching security authority in the West Bank and routinely carries out arrest raids in Palestinian cities and towns administered by the PA.
Under the 1993 Oslo agreements, the PA is obliged to share information with Israel about any armed resistance to the Israeli occupation in a practice known as "security coordination", which was briefly suspended last year after Israeli plan to annex the occupied West Bank.
Hamas, which governs the Gaza Strip, has criticised the PA for the so-called "security coordination". Many Hamas members have been arrested due to PA's cooperation with Israeli authorities.
Relatives of Palestinian Jamil al-Amuri, killed by Israeli special forces, mourn in Jenin [Jaafar Ashtiyeh/AFP]
Israeli forces frequently carry out arrest raids in the occupied West Bank. On May 25, Israeli forces killed a Palestinian during one such raid near Ramallah.
Palestinian media reported that, following the withdrawal of Israeli forcesÂ  from Jenin, Israel deployed reinforcements at the northern entrance to the Palestinian town.
The incident comes weeks after a fragile peace was agreed following an 11-day Israeli war on besieged Gaza left more than 250 Palestinians dead, including 66 children.
At least 12 people were killed in Israel in rockets attacks carried out by Palestinian armed factions.