In A Riverine Life 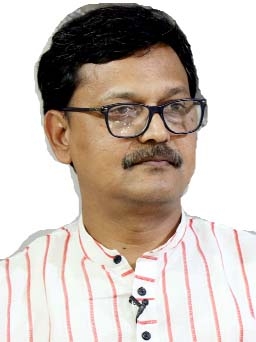 Khalid Mahmud Chowdhury :
From Previous Issue
However, we can never progress forsaking the ideals of Bangabandhu. After the contribution made by Bangabandhu for 3 and half years during his ministerial service, no one else was bequeathed anything to Bangladesh. Bangladesh took a path of regression. During Bangabandhu's time, the Bangladesh Shipping Corporation began its journey with 19 ships. By 2010, the number decreased to 2 ships. But instead, there should have been hundreds of ships by that time. Bangladesh walked backward, that's why from 19 ships, and the figure tumbled down to only 2. With the leadership of the Deshratna (Gem of the Country), the Bangladesh Shipping Corporation has taken a U-turn again. Bangladesh did not have a deepwater pier, but at present a deep harbor is being built at Matarbari in Cox's Bazar with an estimated project of 17000 crore taka. The Payra Haven is visible today. Ships from different countries are making anchorage at the Mongla Port. In this way, Bangladesh is making progression in all aspects.
We are in the Mujib Millennium and about to embark upon the Golden Jubilee of Independence. Prime Minister Sheikh Hasina has emboldened the people of Bengal. She has opened Bangladesh to the world. Not only the maritime boundary but we are also striving to bring the whole world within our grasp. The expedition will be a long one. Our Prime Minister Sheikh Hasina is leading the maritime sector forward to reach that goal.
For the economic development of our riverine Bangladesh, the role of shipping belt is important. Considering the importance of rivers for the development of agriculture, fisheries, trade and commerce, and communication, a holistic and integrated programme has been launched to protect rivers. With the visionary leadership and general instructions of the well qualified daughter of the Father of the Nation, the Gem of the Country, Prime Minister Sheikh Hasina, the maritime sector is spreading fast. Different river ports have been modernized and renovated. With a view to building an epoch-making, modern and eco-friendly aquamarine port, suitable for the twenty first century, the third largest seaport in the country, the Payra Deep Seaport is being constructed in Patuakhali to meet the increasing demand of import-export. By 2023, the Payra port will be furnished as a world class up-to-date harbor.
To excavate waterways, 34 dredger machines have been acquired and to manage ferry-crossing properly, 17 ferries have been built. More dredgers for excavation are going to be collected and capital dredging work is going on. Necessary initiatives have been taken for the excavation programme of 10000 kilometer of waterways, eviction of grabbers of river banks and to bring back the navigability of the rivers. To ensure and enhance the navigability of rivers and to prevent occupation and pollution, the National River Conservation Commission has been formed. An Inland Container Terminal has been built at Pangaon. Implementation of different large-scale activities has been made to create mobility in Chattogram and Monglaports, and a plan for establishing a bay-terminal in Chattogram is under way. In order to develop human resources in maritime sector, Bangabandhu Sheikh Mujibur Rahman Maritime University and four new marine academies have been founded in Sylhet, Rangpur, Barishal and Pabna. Steps have been taken to modernize and renovate the Bangladesh Shipping Corporation, and six ships have been acquired; further acquisition of another 6 ships is going to be made. For sailors who work on foreign ships a procedure of providing machine readable identity papers 'ID Card' is being operated. A venture for the development of ten new land ports including Benapole Land Port is going on.
The Prime Minister of a war-torn, newly liberated country Bangabandhu Sheikh Mujibur Rahman made Bangladesh shine wherever he went on this planet. Today we can dream because of the political philosophy of Bangabandhu. At this moment ours is a middle-income country, on the way to be a developed one - it has been possible for internalizing the ideology of Bangabandhu. If we can retain Bangabandhu each moment of every day, only then we shall march forward. From 1949 to 2021, the Awami League has been into politics to establish the rights of the people of this land. Whenever this party has taken the responsibility to administer the country, people have achieved something. Behind every country's progress, there is politics. If that politics is for honesty, righteousness and patriotism, the country cannot lag behind. Bangabandhu struggled for 24 years with an honest and upright aim in view. For this reason, he could emancipate a country.
The worthy daughter of the Father of the Nation, Sheikh Hasina is running the country with transparency and devotion. On the other hand, a profound conspiracy is being plotted against Bangladesh. Even plots against our patriotic army are being framed. The Bangladesh Army has been continuously playing a gigantic role in the development of Bangladesh and for world peace. Nonetheless, a deep conspiracy is going on to sabotage the army by making its contribution questionable. When with the leadership of the honorable Prime Minister, Bangladesh has reached a prestigious position of a free democratic country, the economy of Bangladesh has become a matter of pride, at that moment an attempt to create an arena of conspiracy in the international hemisphere is being made to set back its progress. We must remain extremely vigilant against these anti-national schemes.