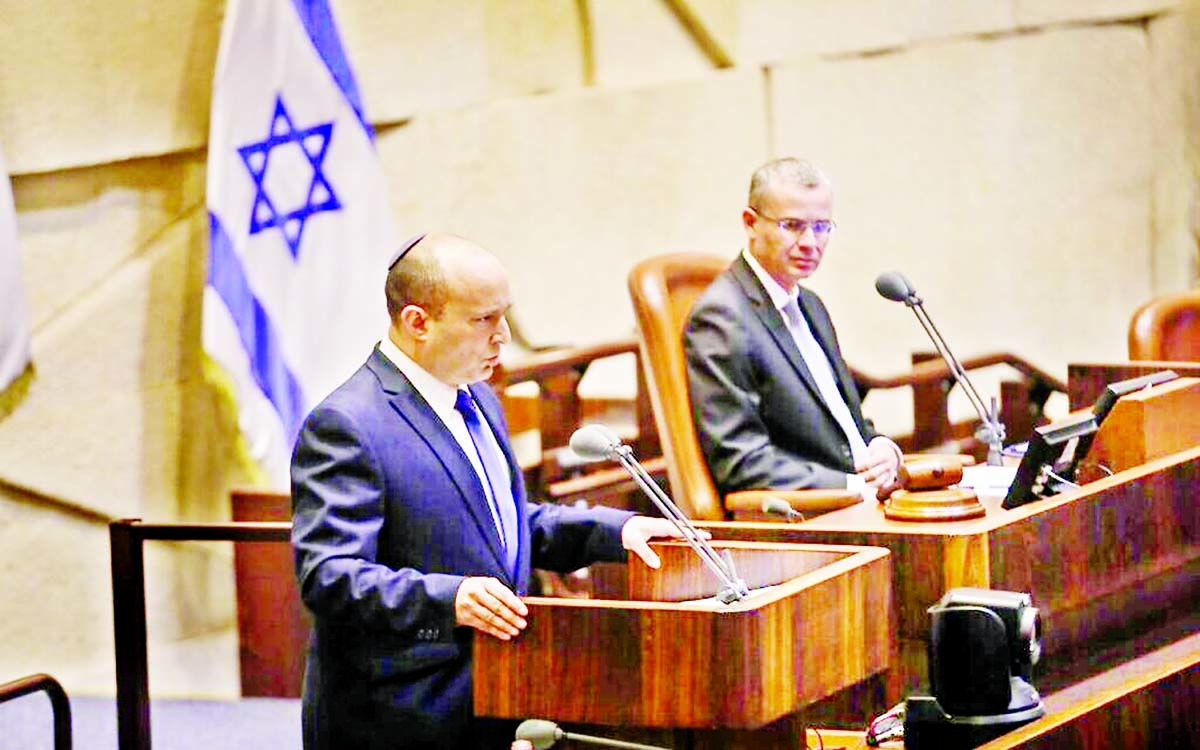 International Desk :
In a speech constantly interrupted by soon-to-be opposition lawmakers, Prime Minister-designate Naftali Bennett presented his new "reasonable and responsible" government Sunday afternoon at its swearing-in ceremony at the Knesset, pledging that it would "end a terrible period of hatred among the people of Israel."
Struggling to speak over the shouts of Knesset members from Likud, Religious Zionism and the ultra-Orthodox parties, Bennett said that his government of right-wing, left-wing, centrist and Islamist parties came together to end two years of political deadlock and "put Israel back on a sane path."
With his swearing-in later Sunday set to end 12 consecutive years of Benjamin Netanyahu's rule as prime minister, Bennett thanked the outgoing premier and his wife, Sara Netanyahu.
"You both sacrificed a great deal for the State of Israel," he said. But as members of Netanyahu's party shouted at Bennett that he was "a criminal" and a "liar," Bennett, raising his voice to talk over them, said Likud MKs were providing proof of the urgent need to bring back decency and unity to Israeli politics.
"I am proud of the ability to sit with people with very different opinions," he boomed. "At the decisive moment, we took responsibility."
Barring any last-minute surprises in the voting, Bennett is set to become prime minister, to be replaced two years later by centrist Yesh Atid chief Yair Lapid, while Netanyahu - who has led the country overall for 15 years - will become the leader of the opposition.
Bennett said that the alternative to a new government was more elections and more hate, which would have broken up the country. Israel has held four national elections since April 2019, which yielded just one government: a short-lived power-sharing coalition last year of Likud and Benny Gantz's centrist Blue and White.
"It is time for responsible leaders from different segments of the nation to stop this madness," Bennett said, as Knesset Speaker Yariv Levin repeatedly tried to silence hecklers and ordered several lawmakers removed from the plenum.
Reacting to the shouting in parliament, Bennett said: "We are facing an internal challenge, a divide in the people that is being seen in these very moments."
That divide "has led us to a storm of hatred and a clash of brothers, to the country being paralyzed," he said, speaking of various social and regulatory reforms his government plans to enact on legal, social and religious matters.
Netanyahu's Likud has committed to an orderly transition of power if the Knesset approves the new government, even as it raged against the prospect of Bennett becoming prime minister despite having won just seven Knesset seats with his Yamina party. Likud won 30 seats in the March vote to again become the largest party, but Netanyahu failed to assemble a coalition.
The intended Lapid-Bennett government is backed by eight of the 13 parties that won seats in the March 23 election, for an expected total of 61 votes in the 120-member Knesset: Yesh Atid (17 seats), Blue and White (8), Yisrael Beytenu (7), Labor (7), Yamina (6 of its 7 MKs), New Hope (6), Meretz (6) and Ra'am (4). The parties slated to be shunted to the opposition are Netanyahu's Likud, the ultra-Orthodox Shas and United Torah Judaism parties, the far-right Religious Zionism, and the predominantly Arab Joint List.
Bennett said that the government would work for all segments of society, including those that have not supported his decision to build a coalition with left-leaning parties and the Islamist Ra'am.