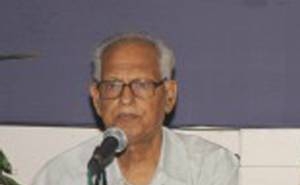 Renowned sociologist and former Dhaka University professor Rangalal Sen has passed away. He died at a Chittagong hospital on Monday afternoon, Dhaka University Public Relations Officer Ashraf Ali Khan said. Sen, a national professor, had been suffering from kidney disease and other old-age ailments. He was 81. Dhaka University Vice-Chancellor AAMS Arefin Siddique expressed profound grief at Senâs death. A press release from the university said the professorâs mortal remains would be kept in front of the Arts Building from 10am to 11am Tuesday for the public to pay their respect. Sen was born on Sep 24, 1933 in Moulvibazar. He graduated from Dhaka Universityâs sociology department in 1962 and completed post-graduation the next year. He was the first student from that department to obtain a first class in masters. He did his PhD from Sussex University in England in 1977. His PhD dissertation âPolitical Elites in Bangladeshâ was acclaimed internationally. Sen retired after 37 years of teaching at the Dhaka Universityâs sociology department. He was made a national professor in 2011. He took part in writing the sociology syllabuses for Shahjalal University of Science and Technology and the National University. He had written a total of 23 books in English and Bangla. Sen left behind wife Kamala Sen, a son and two daughters. Â