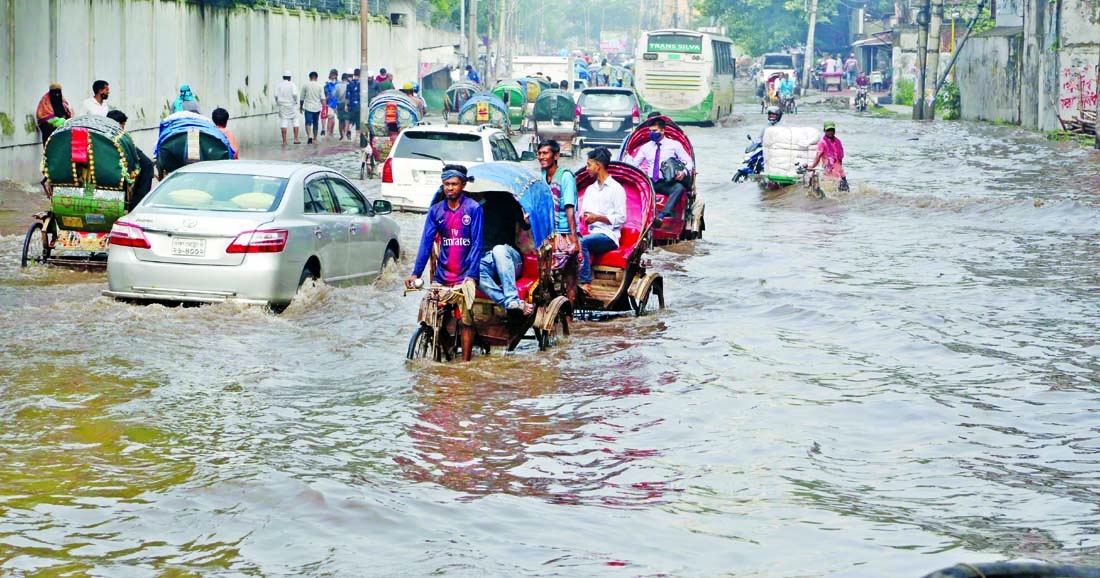 A road behind Bangabhaban in the capital inundates following heavy rain on Monday.

UNB :
Torrential monsoon rain swamped many parts of the capital on Monday, disrupting public movement and triggering a traffic chaos.
According to the Bangladesh Meteorological Department, 12mm of rain was recorded in the last 24 hours in Dhaka until 6am Monday.
Besides, 3 mm rain was recorded from 6 am till 3 pm on Monday afternoon.
As usual, this was enough to shatter the tall claims of monsoon preparedness made by the city's municipal corporations, as several areas faced waterlogging problems.
The sorry state of Mirpur,Rampura and Badda remained the same as they were the hardest hit areas of waterlogging and people of those areas were seen wading through ankle-deep water to reach their destination showers relented.
The other affected areas are Sewrapara, Kazipara part of Begum Rokeya Sarani, Agargaon crossing, Bijoy Sarani crossing, Kalabagan, Farmgate , Shegunbagicha, Bijoy Nagari, Motsho Bhaban and Fakirapool areas have also been inundated, reported our correspondents.
A number of vehicles remained stranded at different city streets due to waterlogging since morning.
Bangladesh Meteorological Department couldn't provide any relieving information as they predicted the rainfall to continue across the country including Dhaka.
According to the Met Office website, light to moderate rain or thundershowers accompanied by temporary gusty wind is likely to occur at most places over Khulna, Barishal and Chattogram divisions and at many places over Rajshahi, Rangpur, Dhaka, Mymensingh and Sylhet divisions with moderately heavy to very heavy falls at isolated places over the southern part of the country.