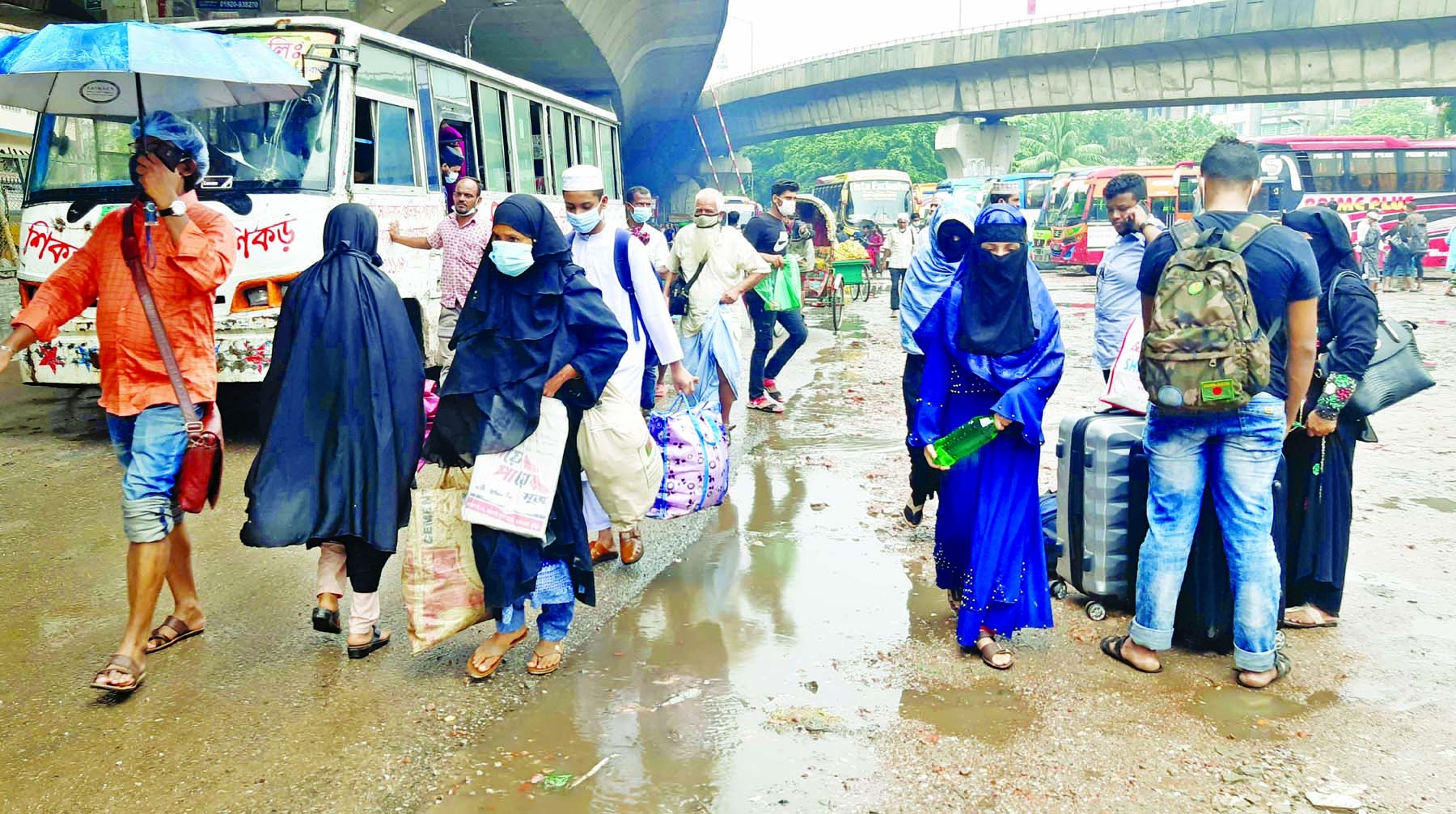 Passengers are returning from Sayedabad bus terminal in the capital on Tuesday as the authorities stop plying long-route buses from the city.

Noman Mosharef :
The movement of bus, train and water transports to and from Dhaka was halted yesterday. This caused immense sufferings to members of the travelling public.
Due to coronavirus surge in the country, the government has imposed "lockdown" in Narayanganj, Manikganj, Madaripur, Munshiganj, Gazipur, Gopalganj and Rajbari districts from June 22 to 30, saying no vehicles, except those carrying goods, will be allowed on the streets in these districts.
As a result, the citizens faced acute transport shortage to reach their destination making possible on foot to reach their work places or emplacement.
Md Ashraf Ali came to Dhaka from Mymensingh for his son's treatment purpose. Now he got stuck with his family including ill son for lockdown.
He said, we don't know, actually what the government wants? Sometimes they relax lockdown, sometimes announces without any pre-cautions. There is no specific plan about coronavirus.Â  Ashraf Ali said, how I will reach home, I don't know. Some unusual vehicles ply on the street during lockdown charging 8-10 times higher fare which is too much difficult for us to support.
Khairul Islam Mintu, a transport union leader who lives in Savar started his journey from Savar. When the bus reached Aminbazar area, police barred it from entering the capital and forced to return to Savar.
Angry Minty talked to the New Nation and said, police obstructed to enter the capital. Thousands of people are suffering. Even they could not walk as it was raining in torrents and the footpath submerged.
He said, such a lockdown is nothing but the suffering of the people. There are lots of people whose work places are in Dhaka but
live in Savar. This lockdown makes huge suffering of them.
Moreover, hundreads of readymade garment (RMG) factories' workers are facing immense suffering to reach their respective workplaces as the factory authorities did not arrange transports for their movement during lockdown.
Many of them were seen walking in the rain to reach their destinations as long-route transports are being kept suspended due to lockdown in seven districts.
Earlier on Monday, BGMEA President Faruque Hassan said that the manufacturing activities will continue in the readymade garment factories in the seven districts.
Khandaker Enayetullah, Secretary General of Bangladesh Transport Owners Association, confirmed that highway buses could not operate in any way.
BIWTA said that launch and other waterway transports could not be navigating amid the lockdown.
Disobeying movement restrictions imposed by the government Trawlers were cruising on Shimulia-Banglabazar route. Some passengers said since ferries were unavailable, they used trawlers after waiting for a long time.
Law enforcement agencies are very strict to make successful the ongoing lockdown.
Mizanur Rahman, Assistant Police Commissioner of DMP Darussalam zone, said all kinds of movements - both mass and vehicular - are being restricted at Gabtoli point.
"Although the sudden imposition of the curb order ensued long tailbacks on the Dhaka-Aricha highway in the morning, it is gradually returning to normal," he said.
DMP Deputy Commissioner (Uttara Zone) Saiful Islam said, "Night coaches on the Dhaka-Mymensingh highway that reached the city early in the morning were exempted from the restriction. However, the suspension order has been imposed completely later in the day."
Badrul Hasan, additional deputy commissioner of Uttara traffic zone, said that legal action is being taken, depending on the seriousness of crime, if anyone violates the order.
Â Â Â