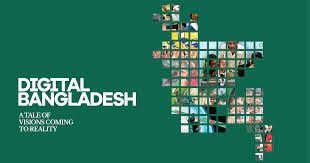 With the aim of establishing a knowledge-based society and to build a digital Bangladesh the present Hon'ble Prime Minister Sheikh Hasina on the eve of 9th national election held in 2008 announced the implementation of the Charter of Change namely Vision -2021. In this timely vision, he pledged to build the golden Bengal dreamt by the father of the nation free from hunger and poverty through the maximum use of information technology. The Prime Minister outlined his unique vision of developing skilled human resources fit for the 21st century, establishing effective communication with citizens, bringing government services to the doorsteps of the people through e-government and making the private sector more productive and competitive through the use of digital technology.
Â The Prime Minister's Office's A2I program is tasked with fulfilling the dream of building digital Bangladesh.Â  In collaboration with the A2I program, initiatives were taken to deliver government services in every sector including agriculture, education, health, economy, trade and industry to the people.Â  To this end, 7,600 digital centers have been set up at various levels of local government including the Union Parishad.Â  About 300 types of citizen services are being provided from all these digital centers. To establish transparent, efficient, accountable, innovative and people-oriented administration; the National Web Portal has been built to reduce the distance between the government and the citizens and to bring all government services on one platform.Â  About 51,500 websites of government departments have been linked to the National Web Portal and the necessary information of the citizens and about 657 types of services have been included so far.
To speed up the government decision-making process, about 11 lakh government employees of 8,000 offices have been brought under the e-File system. To provide emergency police, fire service and ambulance services to all citizens, 999 Emergency helplines has been introduced.Â  The people of the country are getting all the information services of the National Web Portal by calling 333 helplines from home.Â  Through this helpline, the citizens can request all the field level officials including the Deputy Commissioner, Upazila Nirbahi Officer to solve various social problems and get citizen services.Â  With the help of digital technology, government assistance is being provided to more than 37 lakh poor and helpless people under the social security program. During the Corona epidemic if someone outside government list becomes helpless, they can call the 333 helpline and get government help.Â  At that time, more than 4 lakh people took the help of telemedicine from about 4,000 doctors by calling the helpline.
Following the timely directions of Hon'ble Prime Minister Sheikh Hasina, daughter of the Father of the Nation Bangabandhu Sheikh Mujibur Rahman, the Ministry of Environment, Forest and Climate Change is working relentlessly to ensure a conducive sustainable environment for the present and future people of the country through conservation of environment and biodiversity, control of environmental pollution, mitigation of climate change, development of forest resources and sustainable management of marine resources. Following the National Information and Communication Technology Policy 2009, the government has emphasized on the use of information technology in all fields to make Bangladesh a digital Bangladesh.Â  As part of this, the Ministry of Environment, Forest and Climate Change and the departments / agencies under it have taken initiatives to facilitate services through digitalization to bring dynamism, transparency and accountability in the delivery of key services.
For setting up industrial establishments or undertaking projects, section 12 of the Bangladesh Environmental Conservation Act, 1995 obliges to obtain environmental clearance from the Department of Environment.Â  In this context, on the basis of the application of a new or existing industrial factory / project, after the necessary inspection and verification environmental clearance is issued.Â  The Department of Environment adopted the clearance automation project from 4 October 2013 with the help of A2I project.Â  Online application is made compulsory from June 1, 2015 across the country.Â  From 27th December 2017, e-Certificate of Environmental Clearance / Renewal has been issued from all the departments of the Department.Â  As a result, entrepreneurs are receiving applications at home and receiving e-certificates of environmental clearance.
Â The 'e-Laboratory Report' software has been integrated with the automation process for the purpose of accepting online laboratory applications and providing results.Â  Online application for laboratory report is being compulsorily accepted in Dhaka Laboratory from 20t.