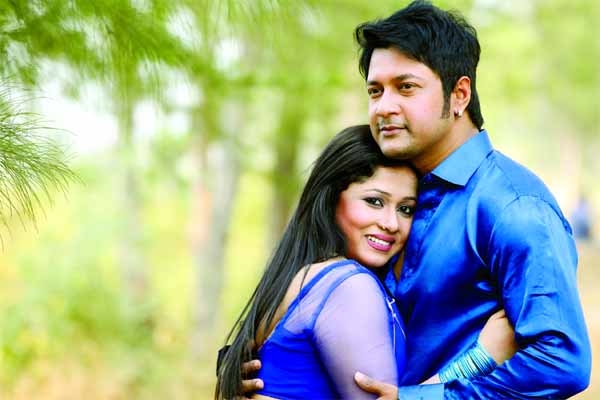 Popular hero of present time Emon has started to take part in shooting of a movie titled Janena E Mon with novice heroine Jaanvi.
The film is being directed by MA Rahim under the story written by Abdullah Zahir Babu. Shooting of the movie began with a playback track in different locations in Coxâs Bazar area from February 8.
Emon is acting in role of âRimon,â while Jaanvi is performing in role of âRiaâ in the movie.
It may be mentioned that after a break of eight years MA Rahim is making any movie. His directed first movie was Narirao Protibadi (2001). Poppy acted in role of central character in the movie.
After a break of eight years, MA Rahim is making the movie Janena E Mon to cast Emon and Jaanvi. Â
While talking about to perform in the movie hero Emon told this correspondent, âStory of the movie is really exceptional. My character in the movie is not typical. Though Jaanvi is newcomer, she is expert in dancing and acting. These qualities do not seen in a newcomer actress most of the time. I think viewers will accept the movie positively.â
Jaanvi shared her feelings by this way, âWith everybodyâs cooperation and pray I have started to perform in the big screen. I had dream to perform as heroine. âSporsho Telemediaâ has given me the opportunity. I am trying my level best to present my role in the movie.â
Saif Khan Kalu is giving dance direction in the movie, while HM Jaman is working as cinematographer. Ahmmed Humayun is giving music direction.
Earlier Jaanvi acted in two telefilms titled Ami Tumi Se and Na Bola Bhalobasha. These telefilms were aired on SA TV.
On the other hand, Emon acted movie titled Jonakir Alo, directed by Khalid Mahmud Mithu, is waiting for release now. Bidya Sinha Saha Mim performed against Emon in the movie.
However, Emon already performed against Anchol for first time in movie titled Swapno Je Tui, directed by Monirul Islam Sohel.Â Â Â Â