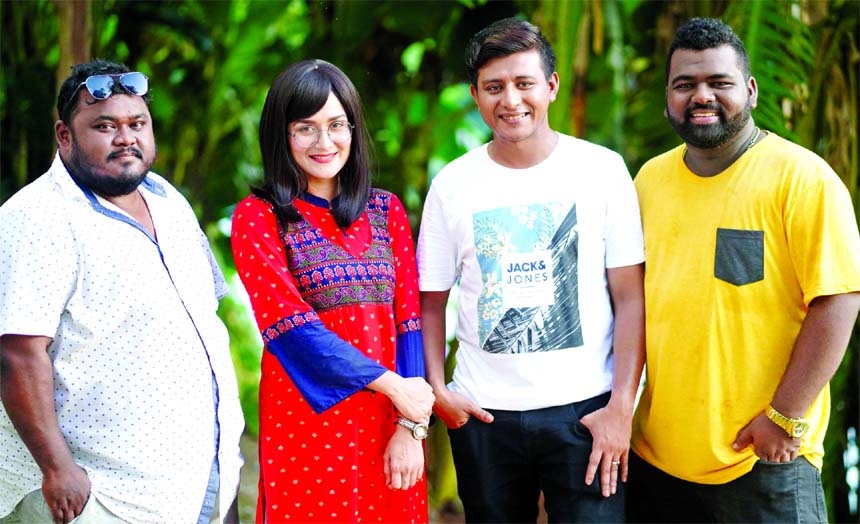 Entertainment Report :
To telecast in a TV channel
during coming Eid festival,
popular playwright and director Shahid-Un-Nabi has made a
special drama titled Complain Boy. Based on Shahidâs own written story, Nirjon Momin wrote script of the drama. Under Shahid-Un-Nabiâs direction, Shamim Hasan Sarkar and Sallha Khanam Nadia paired
up for third time in the drama. Tanzim Hasan Anik also acted with them in the drama. Director Nabi informed that earlier Shamim and Nadia Nodi paired up in his directed drama Bagh Jokhon Biral, which will cross
1 crore view soon. As a pair, Shamim and Nadiaâs second work under Nabiâs direction was Bagh Bondi Biral, which was sequel of Bagh Jokhon Biral. More than 1 million viewers enjoyed this drama. Before staring ongoing lockdown, Nabi made the drama Complain Boy casting Nadia Nodi and Shamim. In
Eid-ul-Azha, after airing in a TV channel, this drama will be also aired on a YouTube channel. While talking about acting of Shamim and Nadia Nodi in the drama Shahin-Un-Nabi said, âShamim and Nadia is a best pair. They have better understanding because in real life, they are very good friend. For this reason, on the screen, their chemistry can be portrayed nicely.
As a director, I am very much delighted to take them in my drama. I have good wishes for them.â Shamim Hasan Sarkar said, âEarlier, Nadia and I worked under same directorâs direction in two dramas and got huge response from the viewers. I believe viewers will enjoy this drama in Eid. I have already
finished shooting of Chayanika Chowdhuryâs drama Bou Bodol against Tanha Tasnia Islam.â
On July 5, Shamim and Tasnuva Tisha-starrer drama Marriage Management has been released on YouTube channel.
On the other hand, Sallha Khanam Nadiaâs birthday was July 5. She celebrated her birthday with her family. Nadia and Tawsif-starrer drama Ekti Osthir Premik, directed by Mitul Khan, has already released on
YouTube channel recently.Â Â