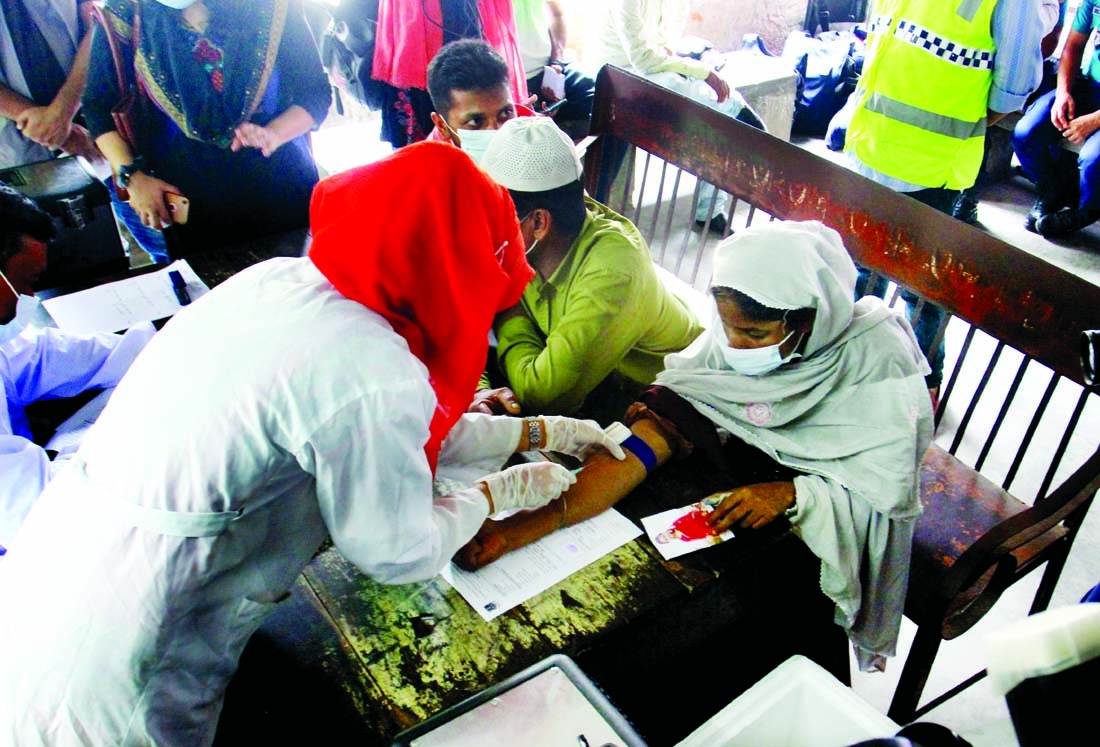 A medical staff collects blood samples from the relatives of the victims of the Narayanganj Hashem Foods Ltd factory fire for DNA testing at Dhaka Medical College Hospital on Saturday.

As the fire broke out at the factory of Hashem Foods Ltd in Narayanganj's Rupganj, 28-year-old senior operator Mohammad Ali called his father, Shahadat Hossain.
"The fire is everywhere, Baba," said Ali in a call that lasted a little over a minute. "The gate is locked. Please forgive me."
On Saturday, two days after the disaster, Shahadat arrived at the Dhaka Medical College morgue from his home in Pabna to look for his son's remains. He was accompanied by his brother, Tipu Sultan. "My son asked for my forgiveness," said Shahadat, his voice weighed down by grief as he recounted the conversation.
Mohammad Ali was the second of Shahadat's four children. Ali's wife, Sadia, gave birth to their son, Mohammad, only two months ago. "Where is my son?" Shahadat kept asking. "My fortune is dark," he said. His wife, Rokeya Khatun, had died of illness only three months ago.
Ali had worked at the factory for three years and was earning a salary of Tk 25,000, according to his uncle, Tipu Sultan.
Many distraught families were combing the morgue in search of their loved ones.
Billal Hossain was looking for his daughter Mitu, who was only 16.
Mitu had begun working at the factory three months ago, for a salary of Tk 5,000, said Billal. The family hailed from Cumilla's Daudkandi.
"But where is my daughter now?" he said.
Jasim Uddin and his wife Josna Begum, from Narsingdi, were also looking for their daughter, 23-year-old Lima. Chandu Mia had come from Kishoreganj in search of his daughter, 23-year-old Rabia.
Shawkat Hossain Khokon was looking for his son, Jihad Rana, a food engineer who had worked at the factory for four years.
Amena Begum and Mohammad Selim came from Kishoreganj to search for their daughter - 14-year-old Selina.
A fire broke out at the Hashem Foods factory in Rupganj around 5:30 pm on Thursday.
That night the local administration confirmed three deaths. But the families of workers at the factory reported at least 47 others missing.
On Friday, the fire service sent 48 bodies to the Dhaka Medical College morgue.
Police said the bodies were burnt badly and it would be impossible to identify many of them without DNA tests.
The CID has taken samples from the bodies and from the relatives of the missing and are attempting to match their DNA.
So far investigators have collected 39 samples from the families, said Masud Rabbi, an investigator at the CID DNA Laboratory.
Fifteen of the 48 dead bodies have been sent to Suhrawardy Hospital, said Siddhirganj Police OC Mashiur Rahman. A few others have been taken to the morgue at Dhaka Medical College Hospital. The rest are at the Dhaka Medical College morgue.