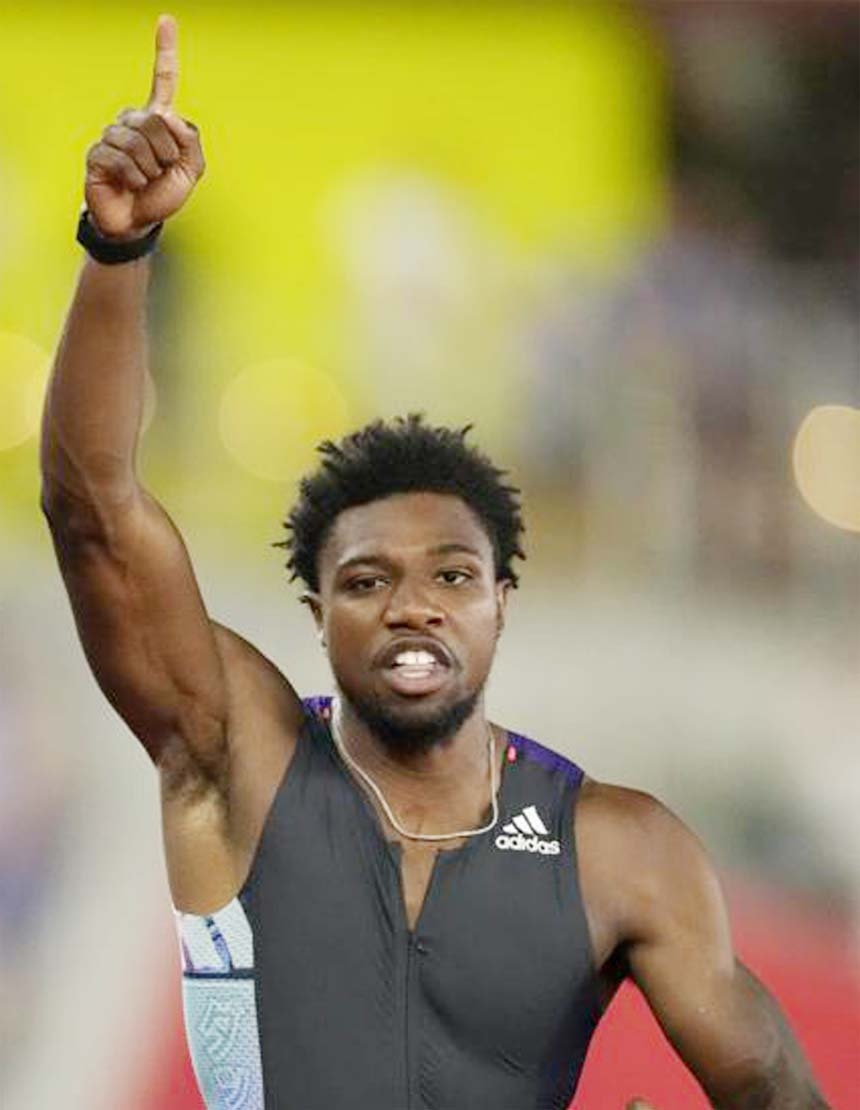 AFP, Los Angeles :
Noah Lyles may have abandoned ambitious plans for an Olympic sprint double, but the charismatic US star believes less may well be more as he targets 200m gold in Tokyo.
After a dazzling performance at the World Championships in Doha two years ago, where he stormed to victory in the 200m, Lyles declared he was planning to take a crack at the 100m-200m double in Japan.
That bold dream ended abruptly at last month's US Olympic trials in Eugene, where Lyles never looked comfortable through the opening rounds of the 100m before trailing in a distant seventh in the final.
But he looked more like his old self a week later in the 200m final, where he surged to victory in a world-leading 19.74sec to see off the challenge of Kenny Bednarek and teenager Erriyon Knighton.
Lyles says rediscovering a sense of "fun" held the key to his return to form after a tumultuous year that saw him open up about his treatment for depression as America faced a racial reckoning following the death of George Floyd.
"I went out there and I had fun," Lyles said. "Another thing I've been struggling to have this year was some fun on the track. I know I've said a lot, 'The day I stop having fun is the day I leave.'
"And I was not having fun this year, and I did not want to leave. I was like, 'I know this can be fun. I just have to bide my time.' Going out there, it was fun again."
With the 100m off the agenda in Tokyo, Lyles is free to concentrate on the race that has always been his strongest suit.
After cruising through the opening rounds of the 200m at the trials last month, his sense of relief was palpable.
"It always feels natural when I come back to the 200," he said. "I don't have to stress too hard. I don't have to think about too much.
"I don't even have to worry about if I get a good start or not, because I know, whatever the situation is, I can always come back in my turn and then slingshot off, be strong in my finish. It's really a comfortable feeling." Lyles made headlines last year when he revealed on social media he had been receiving treatment for depression, something which deepened during the anxious months of the Covid-19 pandemic and the events following Floyd's death in May.
In August, Lyles said he had been using antidepressant medication, describing it as "one of the best decisions I have made in a while."
"Since then I have been able to think without the dark undertone in mind of nothing matters," he said in a post on Twitter.
"It got to the point where I was just so deep, deep inside of myself that I was just putting on a face and doing what I needed to do," Lyles said of his mental health struggles.
"My family came down for Christmas and my mum was really starting to worry about me. So that's when I started ringing my personal therapist on a regular basis, and it was going well for a time but once coronavirus hit and the Black Lives Matter movement started happening, it created the perfect storm."
Lyles meanwhile has embraced the upsurge in athlete activism that became part of last year's Black Lives Matter protests.
In August, Lyles wore a black glove and raised his fist in defiance with his head bowed before a race in Monaco, a reference to the iconic gesture made by 1968 Olympic 200m gold and bronze medallists Tommie Smith and John Carlos.