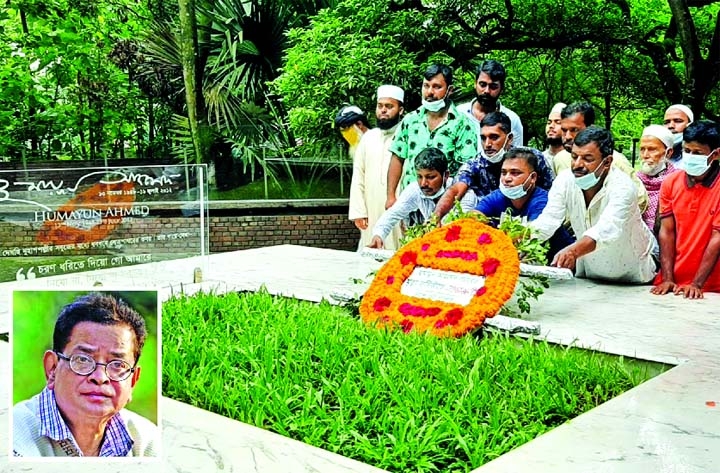 Entertainment Report :
July 19 marked the ninth death anniversary of noted writer, playwright, lyricist and filmmaker Humayun Ahmed. Considered as one of the cornerstones in modern Bengali literature, Humayun Ahmed died
of colorectal cancer at
the age of 63 at Bellevue Hospital, New York on July 19 in 2012. Like previous year, Humayunâs death anniversary was observed by various organisations through a limited arrangement due to the coronavirus pandemic. Several organisations honoured the noted writer through different virtual programmes on various media platforms. Fans and admirers also posted emotional tributes to the legend on their social media accounts. Himu Poribohon, a noted fan base group of eminent writers, also observed this special day since 2013. However, due to corona pandemic situation, the group scaled down its activities. But its Gazipur branch placed floral wreaths on the writerâs graveyard at his beloved Nuhash Polli at around 10:30am.
Saiful Islam Bulbul, Manager of Nuhash Polli, said that the events surrounding the Humayunâs death anniversary had limited due to ongoing Covid-19 pandemic. He also said that none of the prolific writerâs family members came to visit Nuhash Polli this year.
Television channels and radio stations aired various programmes, highlighting the life and glorious career of the wordsmith.
Humayun Ahmed was born in Kutubpur village at Mohanganj, Netrakona to Foyzur Rahman Ahmed and Ayesha Foyez on November 13, 1948. His breakthrough was his debut novel Nondito Noroke published in 1972. He wrote over 200 fiction and non-fiction books, all of which were bestsellers in Bangladesh. He won the Ekushey Padak, the Bangla Academy Award, the Lekhak Shibir Award, and the Michael Madhusudan Padak for outstanding contributions to the Bangla literature. As a filmmaker, he made a total of eight films - each based on his own novels. He received six Bangladesh National Film Awards in different categories for the films Daruchini Dwip, Aguner Poroshmoni and Ghetuputra Komola.