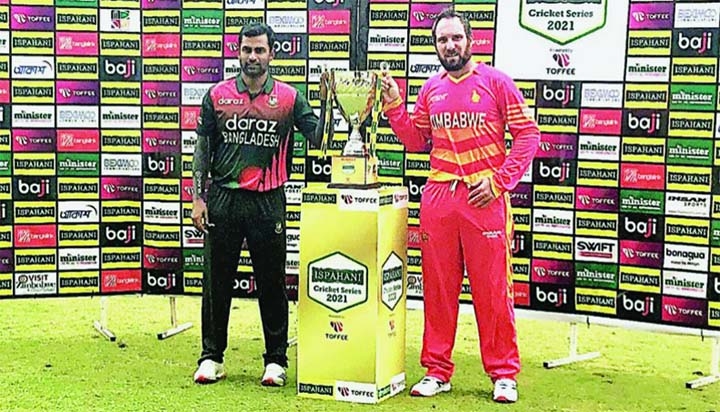 Agency :
Another 10 points in the ICC Men's Cricket World Cup Super League (CWCSL) will make Bangladesh's position even stronger as the race for the 2023 tournament heats up.
The match starts at 1.30 pm as per Bangladesh Standard Time and will be aired live on Gazi TV and T Sports.
With two wins in two games, Bangladesh already have the series in the bag. They would be seeking a clean sweep to assert their dominance before facing tougher opponents as the Super League progresses.
Despite a three-wicket win the last game, the visitors cannot afford to take the hosts lightly. At one point, the Zimbabwe bowlers had tightened their grip on the match and if not for Shakib Al Hasan's resilient knock, the hosts would have levelled the series with ease.
Zimbabwe have plenty of positives from the previous match. They will be particularly pleased with the form of Sikandar Raza, who contributed with a handy knock of 30, bowled well and even took a brilliant catch to send back Tamim Iqbal.
On the other hand, Bangladesh's concern will be their skipper Tamim Iqbal, who was troubled by his knee in the last game and it could be problematic if the veteran does not take field today.
Opting to bat in the second ODI, Zimbabwe struggled to get going initially. At 33/2, they recovered with Taylor (46) and Regis Chakabva (34) laying a solid platform. Wesley Madhevere showed his class with a sublime fifty and Raza added some crucial runs to help the hosts put up a competitive 240/9.
In reply, Bangladesh's steady start was derailed in the 10th over and after a particularly trying middle-phase they began losing wickets at regular intervals. However, the experience of Shakib Al Hasan came in handy as the all-rounder hit a stunning 96*, hitting the winning runs to give the visitors a confidence-boosting three-wicket win.
Bangladesh all-rounder Shakib Al Hasan said, "Today (Sunday) was the day I had to put my hands up, very happy... it wasn't easy and credit to Saifuddin for the way he played. He showed a lot of composure."
Zimbabwe captain Brendan Taylor said, "I am happy with the boys the way they've come back from the last performance. When you are wanting to bat 50 overs, you could get caught up with dot balls. We can be a bit proactive for sure. That's something we'll address today."