Muslims in Bangladesh celebrating another Eid-ul-Azha amid pandemic 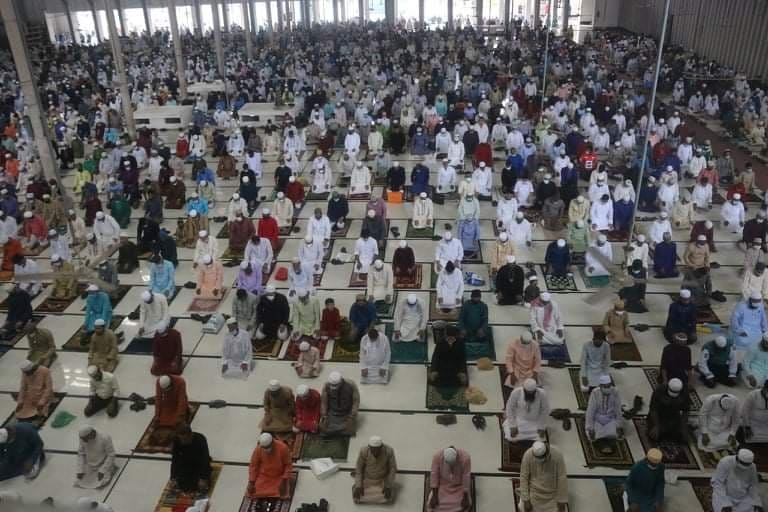 Muslims throughout the country are celebrating their second largest religious festival, Eid-ul-Azha, in the shadow of Covid-19 pandemic sacrificing animals and distributing the meat among neighbours and the poor.

This yearâs celebration had a pandemic written all over its festivities with Covid-19âs Delta variant wreaking havoc across the country, shattering death records almost every day.

Meanwhile, the government has taken various safety measures to make sure that the celebration does not help the pandemic worsens further.

President Abdul Hamid and Prime Minister Sheikh Hasina greeted the countrymen as well as the Muslims across the world on occasion of the holy Eid-ul-Azha during this trying time of pandemic.

President Abdul Hamid offered his Eid prayers at Bangabhaban Durbar Hall as the traditional congregation in the capital's National Eidgah was cancelled.

This year, Dhakaâs first and biggest Eid congregation was held at 7am at the Baitul Mukarram National Mosque in Dhaka, followed by four more at 8am, 9am, 10 am and 10:45 am.

Eid jamaats in different areas across the country were also held as per decisions taken by local administrations in consultation with public representatives and local dignitaries depending upon the Covid situation in their respective areas and maintaining recommended health guidelines.

Meanwhile, the countryâs largest and most traditional Eid congregation, which is usually held at Kishoreganjâs Sholakia on the northern bank of the Norsunda River, was cancelled this year too as the country fights to contain the coronavirus spread.

However, the guidelines issued by the Religious Affairs Ministry for offering Eid-ul-Azha prayers were largely maintained both in the capital and elsewhere across the country.

Once the prayers were over, the common festive scenes of sacrificing animals were seen everywhere in the city. Â

Amid the concerns of Covid spread, well-off Muslims sacrificde animals in commemoration of Hazrat Ibrahim's devotion to Allah as illustrated by his readiness to give up his beloved son Hazrat Ismail.

Dhaka South City Corporation (DSCC) has formed 10 teams and set up a central control room to monitor the removal of sacrificial animal waste from July 21-24 while the Commerce Ministry formed three-phase committees for the management of rawhides of sacrificial animals.

Special diets are being served in hospitals, jails, government orphanages, centres for persons with disabilities, shelter homes and vagrant and destitute welfare centres.