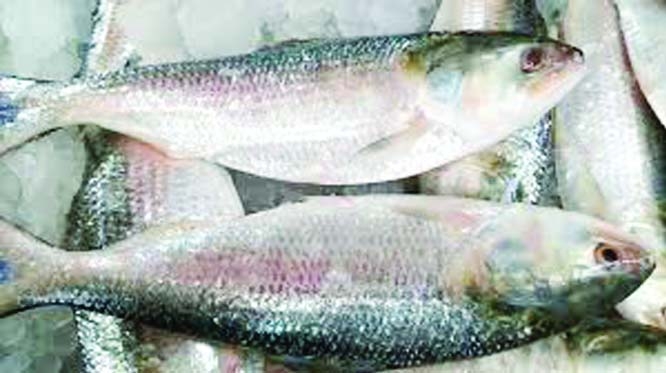 Noman Mosharef :
At the end of the ban on fishing, flocks of Hilsha fish are caught everyday in the fishermen nets in Meghna River.
After more than two month they returned to their profession and expressed satisfaction for catching more Ilish fish.
Last two days the coastal markets were flooded with the fresh Hilsa fish. The fish markets from Noakhali's Hatia, Companygonj, Chandpur's Sadar Upazila, Bhola's Tazumuddin and Daulatkhan upazila had abundance of fish.
Before that the government imposed a 65 day ban starting from May 20 on catching, selling and transporting ilish in a 7,000km breeding ground, to ensure safe spawning of the fish, during its peak breeding period.
After the ban, the fishermen started fishing from Friday Midnight. The rejoice have overflowed in the fishermen locality as they can fishing after ban ended.
More than one fisherman said, we could not go deep into the river as the river is turbulent and met office signals. But till this morning (Saturday)a lot of cristal Ilish were caught which made us happy.
The fishermen also said, the hilsha fish is of small size, but we are hopping later for big size.
Hatia's Burirchar Union Fishermen's Association President Jabiul Haque said after a long time, fishermen are happy to be able to fish in the river. The fishing family also has a festive mood. Liveliness has returned to the ghat.
Meanwhile, hilsa of different sizes has been seen selling at Tk 300, Tk 500 and Tk 700 per kg in the fish market of Basurhat.Â  Miking has been heard in several places around the market due to small number of buyers due to restrictions.
Hatia Upazila Fisheries Officer Anil Chandra Das said there is no warning signal on the coast of Noakhali. They have been asked to fish in nearby places without going to the deep sea in hostile weather.
District Fisheries Officer Dr Md. Motaleb Hossain said the ban was aimed at allowing hilsa fish to grow. In addition, the ban seems to have worked for the breeding of deep-sea fish.
The main purpose of this ban is to safely convert deep sea fish, including hilsa, into mother fish. So that they can safely lay eggs in the river. We think the 65-day ban has worked, he added.