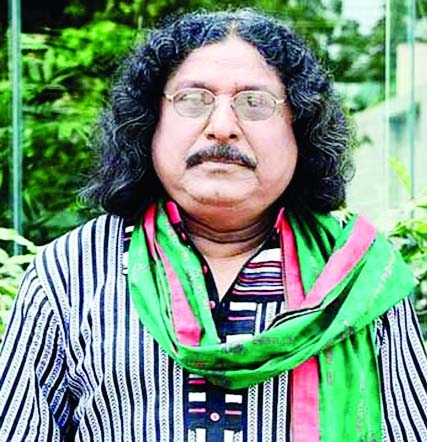 Staff Reporter :
Legendary folk singer Fakir Alamgir was laid to eternal rest at the Khilgaon Taltala Graveyard.
He was buried with state honours at around 1:50pm on Saturday following his second namaz-e-janaza maintaining the Covid health safety rules after Zuhr prayers.
The first janaza of the 71-year-old freedom fighter was held on Saturday morning on the Pallima Sangsad premises in Khilgaon.Â Â  There, he was given a guard of honour for his contributions to Bangladesh's independence struggle.
Later, the mortal remains of the singer were taken to the Central Shaheed Minar premises to allow people to pay their last tributes.
People from all walks of life, defying the bad weather, gathered there to pay homage to the Ekushey Padak awardee.
His fans, leaders of various political, social, and cultural organizations as well as noted personalities paid tributes to him.
He was kept there till 1pm, his son Mashuk Alamgir told the media.
Fakir Alamgir suffered a cardiac arrest while undergoing treatment at the United Hospital and was declared dead at 10:56pm on Friday.
He was moved to the Intensive Care Unit (ICU) of the hospital on July 15 after contracting Covid-19.
He tested positive for the virus after suffering from fever and cough for several days, and was taken to a local hospital after complaining of breathing problems. Later, he was transferred to the ICU at United Hospital.
Fakir Alamgir stepped into the music arena in 1966 and played a vital role during the mass upsurge of 1969 as a member of the "Kranti Shilpi Gosthi" and "Gana Shilpi Gosthi."
During the 1971 Liberation War, he joined the "Swadhin Bangla Betar Kendra" and performed frequently to inspire freedom fighters.
After independence, Fakir Alamgir played a pivotal role in the development of Bengali pop music alongside Ferdous Wahid, Azam Khan, Pilu Momtaz, and others by combining indigenous tunes with western music.
He founded the cultural organization "Wrishiz Shilpi Gosthi" in 1976, and also served as the president of Gono Sangeet Shamanya Parishad (GSSP).
The government conferred the Ekushey Padak to Fakir Alamgir in 1999 for his significant contribution to music.
In his illustrious career, several of his songs, including "O Sokhina", "Shantahar'er Jongshon," "Nelson Mandela," "Naam Tar Chhilo John Henry," "Banglar Comrade Bondhu," became very popular and achieved monumental success.
A graduate of Dhaka University's (DU) department of mass communication and journalism, Fakir Alamgir has also been a writer.
He has published several books, including "Gono Sangeet er Oteet O Bortoman", "Muktijuddher Smriti o Bijoyer Gaan," "Amar Kotha," and "Jara Achhen Hridoypotey."