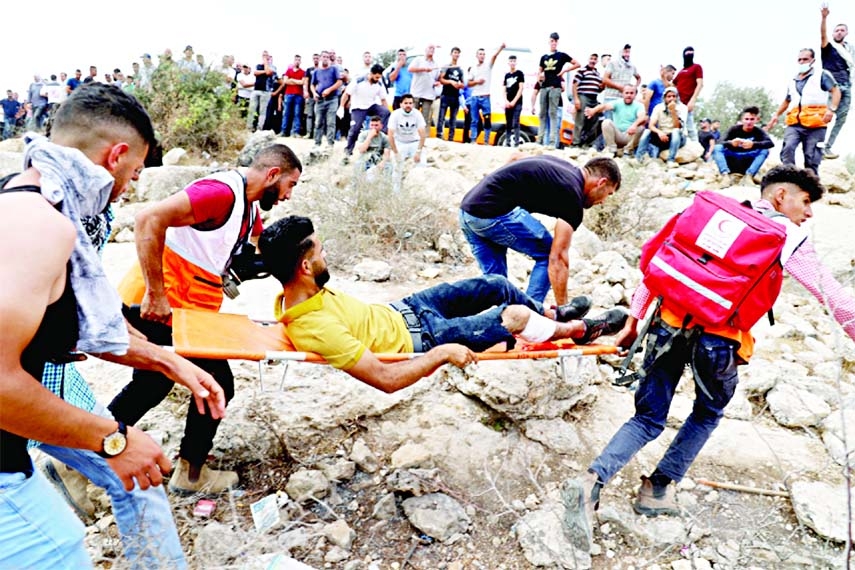 Medics evacuate an injured Palestinian protester amid confrontations with Israeli security forces during a demonstration in the town of Beita near Nablus city in the occupied West Bank.

Al Jazeera :
More than 140 Palestinians have been injured in clashes with Israeli troops in the flashpoint village of Beita in the occupied West Bank, medics have said, during protests against an illegal Israeli settlement outpost.
The Israeli army said two soldiers were also "lightly injured" in the violence on Friday.
Hundreds of Palestinians gathered in Beita, located in the north of the Israeli-occupied West Bank, to protest the nearby illegal outpost of Eviatar, an AFP correspondent said. The area has seen regular demonstrations against illegal settlement expansion on Palestinian land.
The Israeli army said that "over the last several hours, a riot was instigated in the area of Givat Eviatar outpost, south of Nablus."
"Hundreds of Palestinians hurled rocks at IDF (army) troops, who responded with riot dispersal means," it said in a statement, adding that the two "lightly injured" soldiers were taken to hospital.
The Palestinian Red Crescent said 146 Palestinians were hurt during the clashes, including nine by live fire, 34 by rubber-coated bullets and 87 by tear gas.
Jewish settlers set up the illegal Eviatar outpost in early May, building rudimentary concrete homes and shacks in a matter of weeks. The construction came in defiance of both international and Israeli law and sparked fierce protests from Palestinians who insisted it was being built on their land.
But following a deal struck with nationalist Prime Minister Naftali Bennett's new government, the settlers left the outpost on July 2, while the structures they had built were to remain under army guard.
Israel's defence ministry said it would study the area to assess whether it could, under Israeli law, be declared state land.
Should that happen, Israel could then authorise a religious school to be built at Eviatar, with residences for its staff and students.
About 475,000 Jewish settlers now live in the occupied West Bank, which Israel has occupied since 1967.