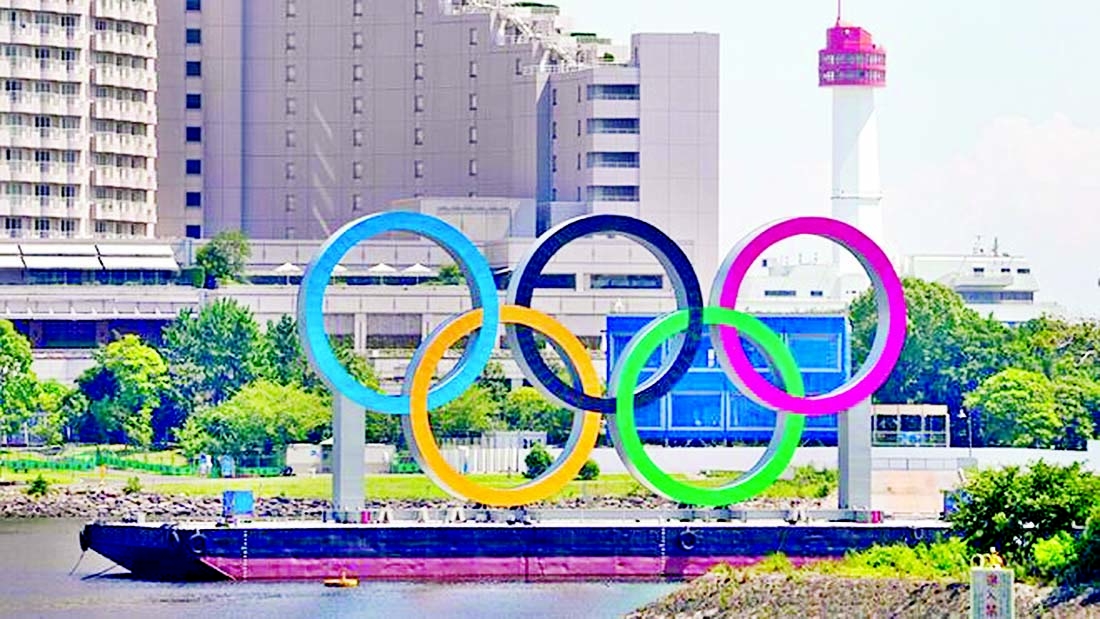 BBC :
China won the first gold medal of the Games and hosts Japan claimed their first gold on a sweltering opening day of the Tokyo Olympics.
Athletes complained about exhausting conditions given the combination of high temperatures and humidity, with several tennis players asking for matches to be moved to start later in the day.
Cyclists in the men's road race in particular felt the strain, but Ecuador's Richard Carapaz managed to defy the conditions, convincingly winning his nation's second ever gold medal.
China's traditional early dominance of the medal table endured, with Yang Qian winning the first available gold in the women's 10m air rifle final.
Shortly afterwards, Hou Zhihui celebrated victory in the women's -49kg weightlifting, with a combined score of 210, breaking the Olympic record.
Naohisa Takato beat Taiwan's Yang Yung-wei in the 60kg judo final at the Nippon Budokan to claim Japan's first gold on what was a mixed day for the hosts.
Elsewhere, a nurse from Iran became the Olympic champion in the men's 10m air pistol competition. Javad Foroughi only took up the sport in 2017, after he was shown how to use an air pistol in a basement under the hospital where he works.
South Korean pair An San and Kim Je-deok took gold in the mixed team archery.
World number one Novak Djokovic made a good start as he continues his bid for the 'Golden Slam', opening with a routine 6-2 6-2 win over Bolivia's Hugo Dellien in the men's singles. But the Serb became the second player to question the scheduling of matches, after Russian Daniil Medvedev suggested a later start time would make conditions more bearable. "Humidity is brutal... I agree with him 100%," said Djokovic. "To be honest, I don't understand why they don't start matches at, say, 3pm.
"Maybe the ITF [International Tennis Federation] can give you a better answer to why they chose to be played in the middle of the day. I doubt they will change the decision, but we're hoping that they will."
The ITF has said the schedule has taken into account factors such as local authority restrictions around Covid-19 and the unpredictability of the weather.
It said player health was paramount, adding that there was an extreme weather policy in place, which allowed for drinks breaks and even suspension of play should certain conditions be reached.
A legend eliminated
One of the biggest shocks of day one came from Japan's seven-time Olympic medallist, gymnast Kohei Uchimura.
The two-time all-around champion, who is 32, had elected to only compete in his preferred apparatus, the high bar. But after a fall in qualifying, he will not feature in the final.
"I hit my peak already," said the veteran gymnast after he watched his team-mates produce a series of high-quality routines.
"It has been so tough to get selected as a national team member. That itself was already really tough."
There was another shock exit for the host nation at the Tokyo Aquatics Centre, as three-time world champion Daiya Seto, regarded as Japan's best hope for gold in the pool, failed to qualify for the men's 400m individual medley final.
Covid still a huge factor
Finn Florijn became the first athlete at the Games to test positive for Covid-19 after competing.
Dutch rower Finn Florijn, who was due to take part in the men's single sculls repechage, tested positive for Covid-19 after competing in the heats.
The 21-year-old has gone into quarantine and will not compete again at the Games.
He is the first athlete to test positive after competing in Tokyo, a development that could throw into question the rigidity of the preventative systems in place.
In the first medal ceremony of Tokyo 2020, Yang was handed her medal on a tray by International Olympic Committee president Thomas Bach in accordance with the Covid-19 protocols that will affect every aspect of these Games.
Winners are asked to place medals over their own heads and masks were worn on the podium at all times.
Eleven gold medals were awarded at the 2020 Tokyo Olympics on Saturday. Here's a breakdown of who clinched gold:
Archery
Mixed Team: Republic of Korea
Cycling
Men's Road Race: Richard Carapaz, Ecuador
Fencing
Women's Epee Individual: Yiwen Sun, China
Men's Sabre Individual: Aron Szilagyi, Hungary
Judo
Women's -48kg: Distria Krasniqi, Kosovo
Men's -60kg: Naohisa Takato, Japan
Shooting
Men's 10m Air Pistol: Javad Foroughi, Iran
Women's 10m Air Pistol: Qian Yang, China
Taekwondo
Women's -49kg: Panipak Wongpattanakit, Thailand
Men's -58kg: Vito Dell'aquila, Italy
Weightlifting
Women's 49kg: Zhihui Hou, China