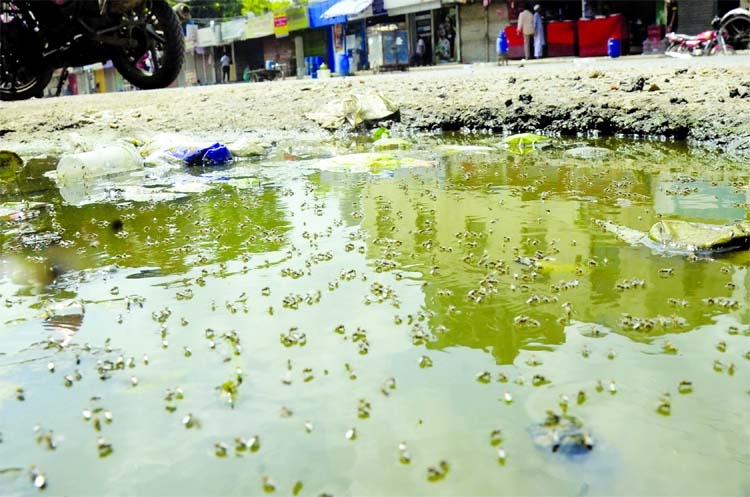 Mosquitoes lay eggs in stagnant water at Chankharpool area in the capital on Monday, although the administration declared to destroy larva, as Dengue cases surge suddenly in the capital.

UNB :
Health authorities said 123 new dengue patients have been admitted to hospitals in the 24 hours to Monday morning amid a spike in the mosquito-borne disease that spreads mainly during monsoon.
For three consecutive days, over 100 patients have been diagnosed with dengue every day adding worries to the country's health services, already overburdened with growing Covid cases and fatalities.
Across Bangladesh, some 468 patients diagnosed with dengue are receiving treatment as of Monday morning, according to the Directorate General of Health Services (DGHS). Most cases have been reported in Dhaka.
DGHS reports 460 patients are receiving treatment at different hospitals in Dhaka, while just eight patients were listed outside Dhaka.
Also of the new patients 120 were admitted to the
government and private hospitals across Dhaka.
Some 1,802 patients have been admitted to different hospitals with dengue since January and 1,331 of them have been released after recovery.
Dengue fever was first reported in Bangladesh in 2000, claiming 93 lives that year. In the years that followed, the country learned to deal with the disease much better, but it did become endemic. Fatalities almost fell to zero at one stage, before spiking again in 2018, leading to the horrific crisis the following year.