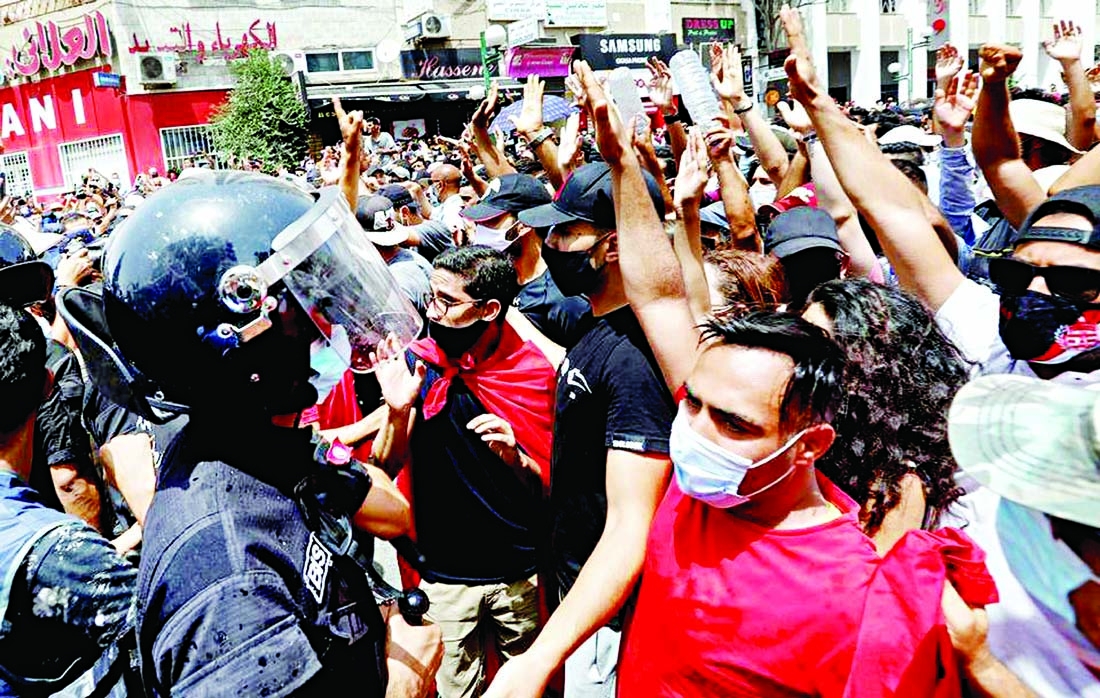 Demonstrators gather in front of police officers standing guard during an anti-government protest in Tunis, Tunisia on Sunday.

BBC Online :
Tunisia's president has sacked the PM and suspended parliament, after violent mass protests nationwide on Sunday.
Anger over the government's handling of a massive recent spike in Covid cases has added to general unrest over the nation's economic and social turmoil.
President Kais Saied, who was elected in 2019, announced he was taking over.
His supporters erupted in celebration, but opponents in parliament immediately accused him of staging a coup. Clashes among rival groups continued on Monday.
They threw stones at each other outside the legislature, which has been barricaded by troops, who have also prevented workers from entering some government buildings.
Mr Saied, an independent, has had a long-standing feud with the man he has removed, PM Hichem Mechichi. Mr Mechichi has the backing of the largest party in parliament, Ennahda.
Tunisia's revolution in 2011 is often held up as the sole success of the Arab Spring revolts across the region, but it has not led to stability economically or politically.
The recent coronavirus surge has fuelled long-standing public frustration. The health minister was sacked last week after a bungled vaccination drive. On Sunday thousands of people across Tunisia demonstrated against the PM and Ennahda, the moderate Islamist ruling party.
Its local headquarters in the south-western city of Touzeur were set on fire.
One protester in Tunis, Lamia Meftahi, told Reuters news agency this was "the happiest moment since the revolution".
Another in the town of Gafsa told AFP news agency the president had "shown himself to be a true statesman", but a second resident there said: "These fools are celebrating the birth of a new dictator."
In the early hours of Monday, the speaker of parliament, Rached Ghannouchi, who leads Ennahda, tried to get into the legislature in Tunis. He was blocked by those who supported Mr Saied's move, and responded with a sit-down protest with his own loyalists.
Later on Monday, Al Jazeera TV, which has been viewed as sympathetic to Ennahda, said security forces had raided its offices in Tunis, unplugging all equipment and telling staff to leave.
On Sunday, in a televised address, Mr Saied said: "We have taken these decisions... until social peace returns to Tunisia and until we save the state."
He later joined the celebrating crowds in Tunis.
President Saied also vowed to respond to further violence with military force.
"I warn any who think of resorting to weaponsâ¦ and whoever shoots a bullet, the armed forces will respond with bullets," he said.
To many, it feels like fresh hope after a year of chaotic governance - to others a move that is constitutionally questionable, with potentially destabilising ramifications and far-reaching consequences.
The events are largely linked to an acute power struggle between the presidency, the PM and the speaker of parliament.
Was this a power grab by the president or a temporary move to get the country back on track? And will his political opponents mobilise their own support on the streets? If so, to what end?
Key to how all this plays out will be how quickly a new prime minister is appointed - and a new plan communicated on moving forward.
In Tunisia, both the president and parliament are elected by popular vote.
Under the constitution, the president oversees only the military and foreign affairs, but Mr Saied has long been in conflict with Mr Mechichi.
Mr Saied has said he will now govern alongside a new PM, with parliament suspended for 30 days.
media captionYoung Tunisians have been protesting as they strive to live in and shape the post-revolution dream.
The president cited Article 80 of the constitution for his actions, saying it allowed him to suspend parliament if it was in "imminent danger".
But the opposition disputes this, and Tunisia's legal and political framework is unclear. The 2014 constitution calls for a special court to be set up to decide disagreements like this, but it has not been established.
As the largest party in parliament, Ennahda has the right to nominate the PM. It denounced the president's move.
Speaker Ghannouchi accused Mr Saied of mounting "a coup against the revolution and constitution" and called on the Tunisian people to defend them both.
Two other parties, Heart of Tunisia and Karama, echoed the coup accusations.
Ennahda denounced attacks on its offices, blaming "criminal gangs" who were trying to "seed chaos and destruction".
Coronavirus-related deaths reached a record for the country last week, passing 300 in one 24-hour period. Tunisia has one of the highest per capita death rates in the world.
Vaccinations have been slow: only 7% of the 11.7 million population are fully vaccinated.
The government attempted to speed up vaccination by opening it to all over-18s during the Eid al-Adha holiday. However, the effort descended into chaos, with stampedes, shortages of supplies, and incidents of violence.
The PM sacked the health minister - an ally of the president - prompting Mr Saied to instruct the military to take over management of the coronavirus crisis.
But Covid is only one factor in the unrest. Tunisia has had nine governments since the 2011 revolution, many of them short-lived or fractured.
Deep-rooted problems of unemployment and crumbling state infrastructure that were behind the uprising have never been resolved.
Tunisia now has budget deficits and debt repayment issues that could require a new loan from the International Monetary Fund (IMF).
But that could hurt Tunisians with the loss of state jobs and reduced subsidies on goods.