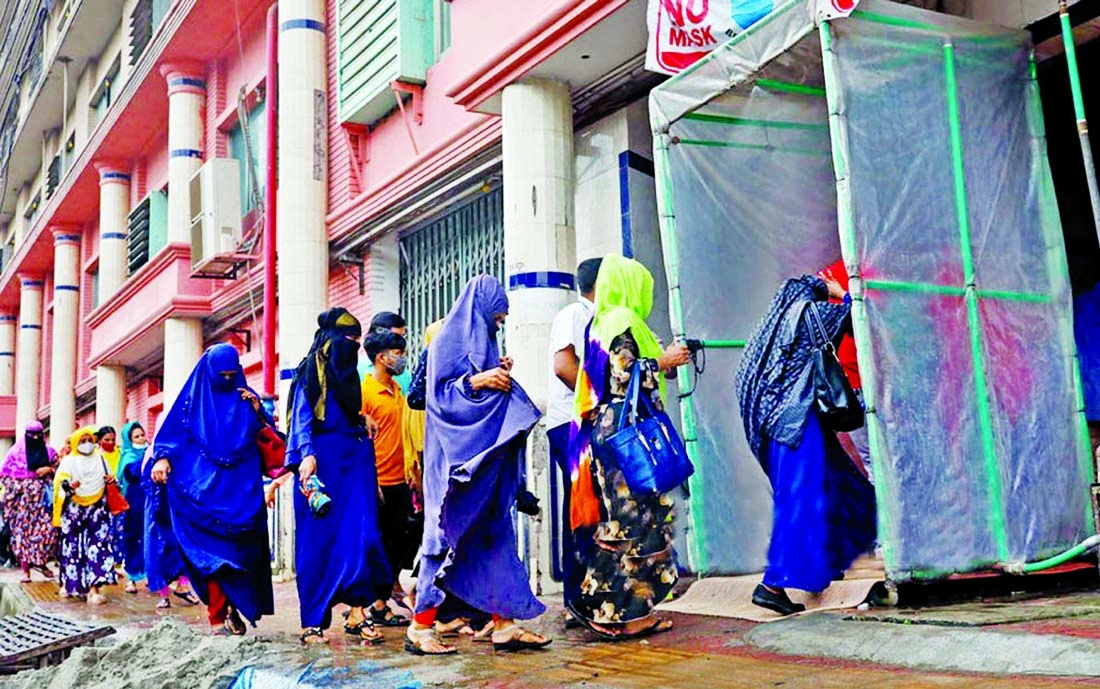 Garment workers pass through a disinfection tunnel to enter a factory in the capital\'s Kamalapur area on Sunday.

News DeskÂ  :
Export-oriented industries resumed operation on Sunday, the 10th day of the ongoing stringent lockdown, amid warnings against Covid surge as workers started returning to their workplaces without maintaining health protocols.
The workers in their thousands have been on their way back to their workplaces in Narayanganj, Gazipur and Mymensingh in Dhaka division since Friday after the government's announcement of reopening factories.
The workers took their arduous journeys to get back to their workplaces as public transport remained suspended due to the lockdown.
They walked miles for miles or moved on in hired auto-rickshaws, motorbikes, goods-laden vehicles in their desperate bid to join work, reports UNB.
Later, the government on Saturday night allowed public transport to operate until 12 pm on Sunday to facilitate the return of workers.
Buses started plying roads from early Sunday and people were seen entering the capital through Gabtoli, Abdullahpur, Mohakhali, Sayedabad, Postagola and Babubazar point by bus or on foot.
The Covid-19 crisis has hit the country's economy hard and jeopardized its impressive achievements in poverty reduction, according to economists.
Akhter Hossain, a traffic inspector (Uttara), said "As the government declared the reopening of factories from today so we allowed the public transport to enter the capital since morning. No transport will be allowed to go outside Dhaka after 12 pm." Â Â  Public transport from the adjacent districts of Dhaka, including Mymensingh, Tangail and Manikganj districts, were seen entering the capital, he said.
However, the number of long-haul vehicles was hardly seen on the roads.
Asaduzzaman, traffic inspector (Mohakhali), said, "We're checking the buses moving on the streets whether they're following health guidelines."
Besides, the checking of private vehicles is going on like the other days, he added.
The launch services also resumed on Sunday morning. The launch owners claimed that they started launch operations late due to a shortage of passengers.
UNB's Tangail Correspondent reports that light traffic congestion was seen on Dhaka-Tangail-Bangabandhu Bridge due to pressure of Dhaka-bound vehicles.
Besides, highway police are working to control the situation.
A record surge in the number of Covid cases and fatalities in recent days prompted the government to enforce a nationwide stringent lockdown, suspending all outdoor activities unless there is an emergency.
As health authorities scramble to prevent the spread of the Delta variant, Bangladesh added 218 fatalities to its national tally on Saturday.
The country registered over 200 single-day fatalities for the last six days as it is fighting a horrific wave of the pandemic that overwhelmed its healthcare systems.
The country recorded 9,369 new cases on Saturday after testing 30,980 samples, and reported the highest daily Covid-19 fatality number - 258 - on July 27 and 16,230 infections the next day, according to the Directorate General of Health Services (DGHS).
There have been 1,249,484 positive cases and 20,685 coronavirus-related deaths here since the pandemic began, the DGHS said.