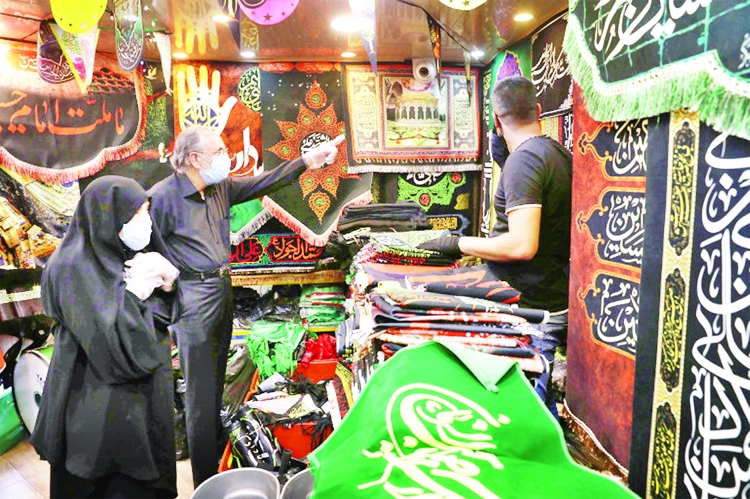 Iranians buy religious symbols of the Islamic month of Muharram, ahead of Ashoura, amid the spread of Covid-19, in Tehran.

Al Jazeera :
Ceremonies to mark the holy Islamic month of Muharram have begun across Iran, even as officials warn that the COVID-19 pandemic is currently claiming a victim every two minutes. The health ministry on Wednesday said 536 more Iranians died over the past 24 hours as it recorded 42,541 cases amid a fifth major wave of infections, this time defined by the highly contagious Delta variant. Since February 2020, more than 95,000 people have died from the disease. But videos from several provinces, including Mashhad, Iran's second-largest city, on Tuesday showed observers packed together in closed and open spaces without masks.
Health protocols that still allow some Muharram gatherings to go forward have faced criticism online and in local media. The guidelines allow gatherings in closed spaces, provided they are held at 25-percent capacity and respect physical distancing.
In Tehran, there are numerous mourning ceremonies each day while businesses remain open and public transport is seeing heavy traffic.
The capital currently accounts for roughly a quarter of all deaths across the country.
Iran's colour-coded map denoting the severity of outbreaks is once again a sea of red as most of the 31 provinces are at the highest level of alarm.
Health officials have warned that public adherence to health protocols, such as wearing face masks and observing physical distancing, is low, at below 40 percent.
Many provinces have reported that hospitals are at, or near, maximum capacity. In several facilities, all hospital beds are dedicated to coronavirus patients while people with other conditions are being refused.
Images have shown long queues at pharmacies as people rush to procure medicine, some of which are in short supply and very expensive.
The country is importing large numbers of intravenous line bags after shortages earlier this month.
Deputy health minister Iraj Harirchi said on Tuesday that virus deaths are expected to rise for more than a month, saying public gatherings could extend that time even further.
But despite the alarming situation, the national anti-coronavirus task force, now chaired by President Ebrahim Raisi who was sworn in on Thursday, has so far rejected health minister Saeed Namaki's request for a two-week lockdown enforced by the armed forces.
The minister had warned in a letter to Supreme Leader Ayatollah Ali Khamenei last week that if quick action is not taken, the country's strained health system could collapse as many health workers are falling ill due to stress.
Iran has imported vaccines from China, Russia, India, Cuba, and the global COVAX initiative, and has several local candidates in the works.
The vaccination rollout has gathered pace over the past few weeks, but the country is far from inoculating its 83 million people.
Roughly 13 million, or 15.6 percent, have received at least one jab, while about three million have received two doses - numbers that are fuelling public anger.
The majority of doses administered so far have been from China's Sinopharm, followed by AstraZeneca jabs.
COVIran Barekat, the country's first candidate, has suffered several production delays, and just over one million doses of it have been administered across the country.
The supreme leader, who in June and July received doses of the Barekat vaccine, in January banned imports of vaccines produced in the United States and the United Kingdom, saying he did not trust them.
On Wednesday, Khamenei called the pandemic the country's most urgent priority, ordering officials to take immediate steps to contain the situation, without going into details.
"Both for imports and for local production, efforts must be redoubled so vaccines can be provided for the people through any means necessary," he said in a short video address.
The supreme leader supported holding Muharram ceremonies but said they must follow health protocols so "enemies" cannot claim they have become centres for outbreaks.