How do our actions affect the birds of Bangladesh 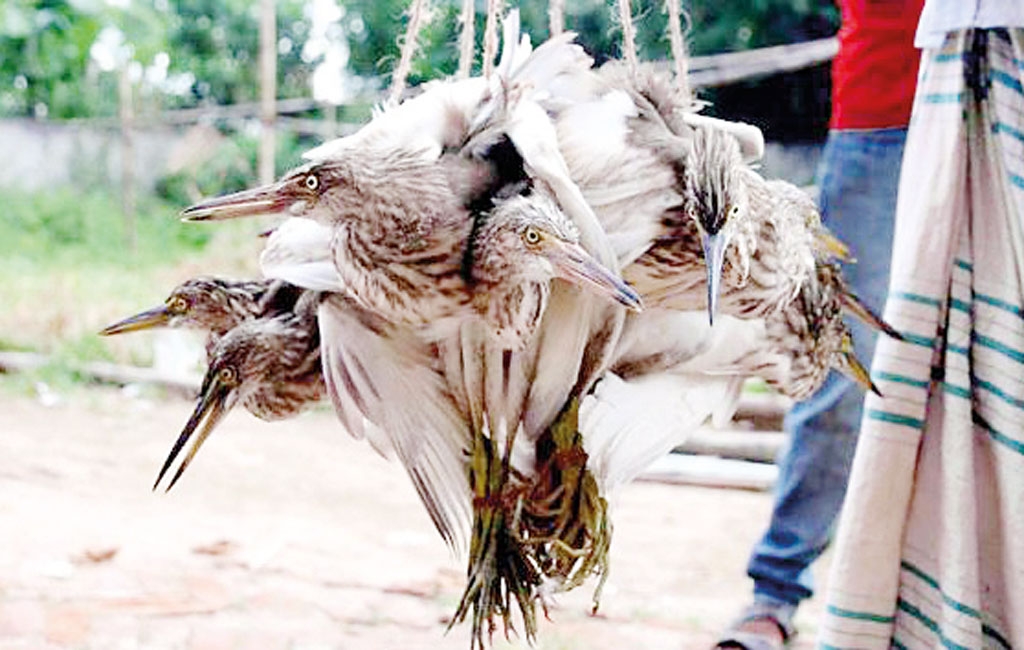 Rafat Hossain: Unlike a few decades ago, birds are not abundant nowadays. One of the biggest reasons is that we do not see the birds as a lot of our lands have been used for making cities and metropolitan areas.
In the past few years, deforestation increased to a rate of more than 2600 hectares per year.
This, consequently, has resulted in a lot of trees being cut, and birds losing their homes.
Even though presently we see some birds making nests in secluded and dark regions of concrete buildings, this is due to the fact that they simply could not locate any better place. The worse is that sometimes these nests disappear. When people find it, they have no choice but to throw it away. In the last century, more than 19 species of birds have faced extinction, and 68 more species are facing conservation threats.
Although this is often overlooked, another big reason for birdsâ decline in population is the overuse of artificial fertilizers and pesticides.
Using artificial fertilizers often means that the unused nutrients will be washed into the rivers and lakes. This then results in an overgrowth of algae, which kills most if not all the fish and other organisms due to anoxia. Since many birds, such as the kingfisher, have diets in fish, it becomes difficult for them to survive. Furthermore, the rivers and lakes often host a variety of insects and small plants that birds eat. So, a lack of such life near the lakes and rivers results in many birds dying of starvation. The use of veterinary drugs such as âDiclofenacâ to treat large quantities of fish in farms also leads to contamination of nearby areas and lakes. Using artificial pesticides means that the unused components decompose very slowly.
These pesticides often kill harmless insects and helpful species such as bees. They also grow in the tissues and become more concentrated along food chains. These results in bird having scarcity of food, and poisoned food that is available due to the bioaccumulation.
The fact is that they are hunted,Â  many species of guest birds have stopped migrating thousands of kilometers to Bangladesh during the Spring.
This is very harmful for the birds, since many of them die in the extreme low winter temperatures of their native countries. Out of the 10 species of birds, currently critically endangered are eight migratory.Â  Over the past decade, the illegal pet market in Bangladesh has grown a lot; this not only affects the population of exotic birds, but also the population of native birds such as mainah, parrots and sunbirds.
One of the most important things is that we can help these birds by creating multiple parks with tall trees therein, so that the birds have some place to build their nests.
We should also educate farmers about the dangers of artificial pesticides and fertilizers, and encourage them to use natural alternatives, which will help both us and the ecosystem.
Appraising people about the endangered species of birds and passing a law against hunting them will help increase their population and stabilize the ecosystem.