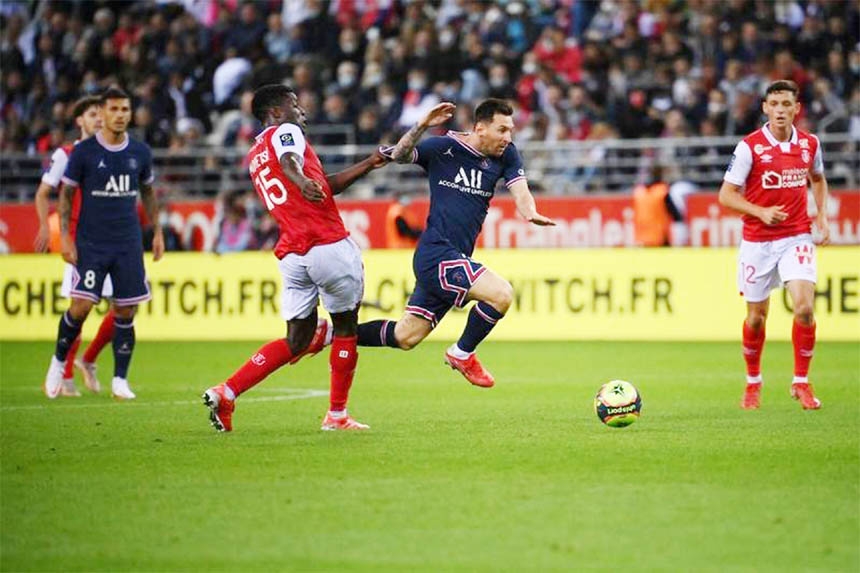 AFP, Paris :
Lionel Messi came on as a substitute to make his Paris Saint-Germain (PSG) debut on Sunday but Kylian Mbappe stole the show by scoring both goals in a 2-0 win against Reims in Ligue 1.
Messi, wearing the number 30 jersey, came off the bench in the 66th minute to replace Neymar at the Stade Auguste-Delaune, where fans in the sell-out 21,000 crowd had earlier chanted his name as he emerged to warm up.
The Argentine had not played since arriving in Paris from Barcelona almost three weeks ago, his last appearance in any game dating back to the Copa America final on July 11, when he led his country to victory against Brazil.
The six-time Ballon d'Or winner will have to wait for his first goal with his new club, and his first start, which could come when PSG host Clermont in their next match on September 11.
"I'm very happy that he made his debut. It was very important for him," PSG coach Mauricio Pochettino told broadcaster Amazon Prime after Messi's low-key first appearance in a PSG shirt.
"He is still far away from his best form but he has been training well and he will be fit in the next two weeks, after the international break and, yes, we are waiting for the best from him."
The week leading up to this game had been dominated not by Messi but by talk of Mbappe's future, with Real Madrid reportedly having two offers for the France World Cup-winning striker rejected.
The latest of these offers was understood to be worth 180 million euros ($212m), an astronomical amount for a player whose contract expires at the end of the season and who will be free to negotiate a deal with a new club in January without PSG being able to get a transfer fee.
That amount is also equal to what PSG paid Monaco in 2017 to sign Mbappe, who was clearly eager to go out on a high if this was to be his final appearance for the club.
With the transfer deadline looming on Tuesday, the 22-year-old did not appear remotely distracted by the talk of a move as he headed in a glorious Angel Di Maria cross in the 15th minute to put the away side in front.
Mbappe then scored his second of the night, and third of the season, just after the hour mark, finishing off an inviting low cross to the back post by Achraf Hakimi.
"Kylian is our player and you know that in football and in business there is always gossip and rumours," Pochettino said of Mbappe.
"I think our president and our sporting director were very clear and he is still here. I am really happy to have Kylian.â