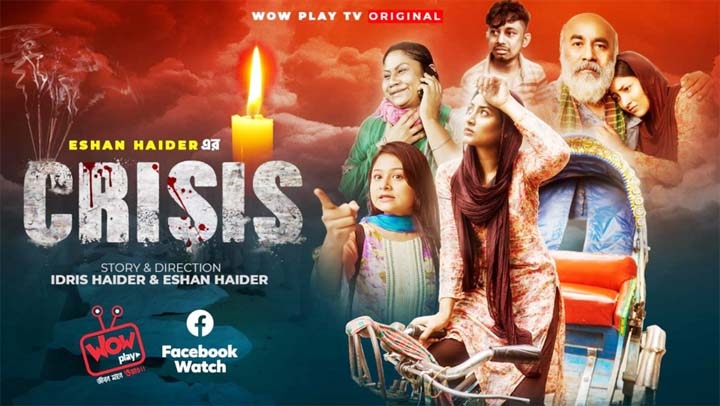 Wow Play TV is a drama video creator, broadcasting and media company of the country where they are operating their production as a video creator on their Facebook page Wow Play TV, which is based on entertainment. They produce exceptional funny, motivational, dramatic video scenes, drama series from their Facebook page which is also visible to Facebook Watch. Recently, Wow Play TV has produced a single drama during this Eid-ul-Adha named âCrisisâ.
Many dramas have been released around this year's Eid-ul-Adha. One of the top trending drama during this Eid-ul-Azha is "Crisis" which is written and directed by Idris Haider and Eshan Haider. The entire drama was released on July 22 at Red Films Entertainment. Shortly after its release, the drama was released on Wow Play TV as episode wise series on their social media Facebook page under Facebook watch.
One of the clip episode went viral where a poor rickshaw puller's daughter was humiliated while going to the market to buy beef for taka 30. The drama "Crisis" took place in the minds of the viewers immediately after its release. Idris Haider and Ishan Haider, the directors of the drama, have shown the real picture very fluently in the drama. Most of the viewers said that they could not hold back their tears after watching this drama and also praised Wow Play TV and said that they would like to see more realistic dramas in the future. Many viewers also commented about "Crisis" as the best drama of the year. Actress Zara Zoya started his media career through this drama. The drama also stars Harun Rashid, Reshmi, Sayla Sathy, Yeasin Adnan, Sakib Wahed and many more. The song "Kothin Shomoy" is sung by Bablu Kabir and the music is directed by Hasan Fz.
After the releasing of the drama, most of the audience shared their emotions for the poor on the official Facebook
page of Wow Play TV. Idris Haider, the director of the drama, said, "In the hope of the OTT platform, it is now possible for us to express our thoughts in a way that we did not have before."