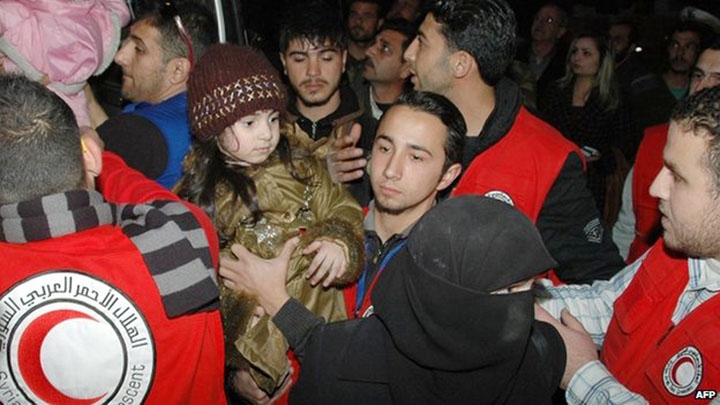 Aid workers have been helping vulnerable people such as children, women and the elderly.

Aid organisations in Syria are hoping to evacuate more civilians from Homs after a ceasefire in the Old City was extended by a further three days.
Some 450 left on Monday. The city has been under siege for 18 months.
More than 1,100 people have been able to leave since Friday under a truce agreed by the local governor and the UN.
Meanwhile, talks between the government and the opposition are set to continue in Geneva.
International mediators in Geneva will try to negotiate greater access for humanitarian aid in Syria - as well as an end to the ongoing violence.
The first round of talks ended last month with no firm agreements and both sides trading insults.
The second round opened on Monday with separate meetings between UN envoy Lakhdar Brahim and the two sides.
The delegations are again meeting face-to-face on Tuesday, although discussions will still go through the UN mediator.
The opposition wants the government to commit in writing to the 2012 Geneva Communique, which called for the formation of a transitional administration with full executive authority.
President Bashar al-Assad's government has ruled out any transfer of power.
On the ground, efforts are continuing to evacuate hundreds more women, children and elderly people from Homs, amid mortar fire and shooting.
Matthew Hollingworth, Syria director for the UN's World Food Programme, told the BBC "the floodgates have opened" as many more people try to leave.
"The levels of destitution inside the Old City are like nothing I've ever seen before," he said.
"People are living in tunnels underground, moving between shells of buildings to find roots to eat - there has been little food for many, many months now."
UN aid chief Valerie Amos welcomed the extension of a three-day truce on Monday.
But she also confirmed that 11 people were killed after the relief operation was "deliberately targeted".
Â It is unclear who was responsible for the attack.