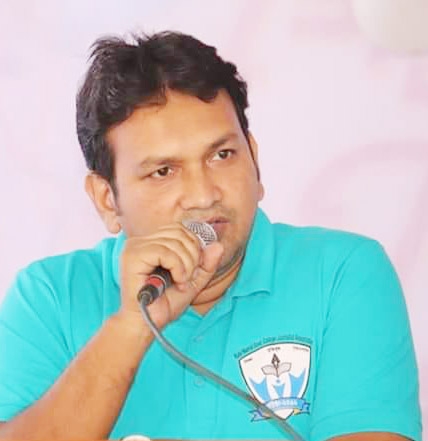 Newspapers are an integral part of literary and cultural struggles and political movements. But the people who are playing this combative role and delivering information to the doorsteps of the people through their writings in newspapers and other sources, how can the story of their coming to this profession be? The story of the staff reporter (crime) of the daily 'Bangladesh Protidin', Mr. Ali Azam, is undoubtedly an amazing example of those penmen journalists' ones.
Azam may never have imagined that his passion for writing would one day take him to such a great level of journalism. He was born and passed his childhood in the Kolimajhi village, Boalmari Upazila under Faridpur district. He passed his SSC and HSC exam respectively in the years of 2000 and 2002. Later, he completed Honors in English Literature from Kabi Nazrul Government College in 2008 and Masters of Social Science in Victimology and Restorative Justice from the Institute of Social Welfare and Research, Dhaka University. Newspapers and journalism were the likable things from his student life.
Reading other people's writings in the newspapers would inspire him greatly to write like them. He used to continue his small endeavors though he was not much confident at first. His friends inspired him a lot to keep up the good writings and thus, he entered the world of journalism with the inspiration of his buddies. Azam is especially grateful to one of his friends named Hamid for the encouragement he got from him. Before that, he used to send different articles to various newspapers and magazines, mentionable in the weekly segments and magazines of the daily 'Janakantha'. Getting those published, really used to fascinate him a lot. Besides, the love and support from his well-wishers really gave him a push to take the next step of a writing profession. Mr. Azam kept going with such writings and formally entered the world of journalism by joining the 'Daily Sangbad' as a crime reporter on June 18, 2011, and started the journey of formal journalism. He is grateful to AKM Baki Billa for gaining the primary knowledge of reporting from him. Azam began working as a crime reporter holding his hand. Afterward, he joined the famous daily 'Amader Shomoy' in 2013. He was elated to find a person like the ever-smiling Mr. Shahjahan Akand Shubho. Staying there for four months, he joined the country's most widely circulated daily 'Bangladesh Pratidin' in May in the same year. Here also he is working in the company of such skilled and respected reporters as Mirza Mehdi Tamal, Alauddin Arif, and Sakhawat Kawsar. Azam got the company of the talented reporters like Sajjad Mahmud Khan, Habib Rahman, Shahidul Islam Razi, Ataur Rahman throughout the journey specially the leader of crime journalists, Mr. Esharaf Hossain Isha as a shadow over the head in all the turmoils. This man had some great achievements in a very short time which gave a turning point to his career ahead. It was indeed a rare achievement for a young reporter like him to be awarded for the âBest Anti-Drug Report in 2012â by the Prothom Alo Trust and for the Best Report on Human Rights by the Bangladesh Manabadhikar Bastabayan Sangstha (BMBS) the same year. This amazing reporter didn't stop doing the great things. He started social work. He established 'Anandanagar Model Madrasa' in Narayanganj where the service for the helpless and orphan children are given emphasis. He always tries to play a vital role in the work for society with his family and friends via social media.
Mr. Ali Azam is engaged with different organizations and platforms at present including CRAB, CRMCS, DRU, DRUMCS, DUJ, BFUJ, DFJF, PIRF, Combined human welfare organization, etc. He is serving as the Vice-President of 'Dhrubatara Savings and Loan Cooperative Society Limited'. Traveling is a hobby of Mr. Azam. He has already visited almost every district of Bangladesh and India twice.
Mr. Ali Azam wants to be associated with journalism till his last breath. This man is playing an incredible role in reaching the news of vast things through his writings to the people, especially the crime reports which are awakening the minds of the masses and the concerned authorities. The country is yet to get more incredible works from this fabulous reporter and this reporter yet has a lot to achieve through his pen.