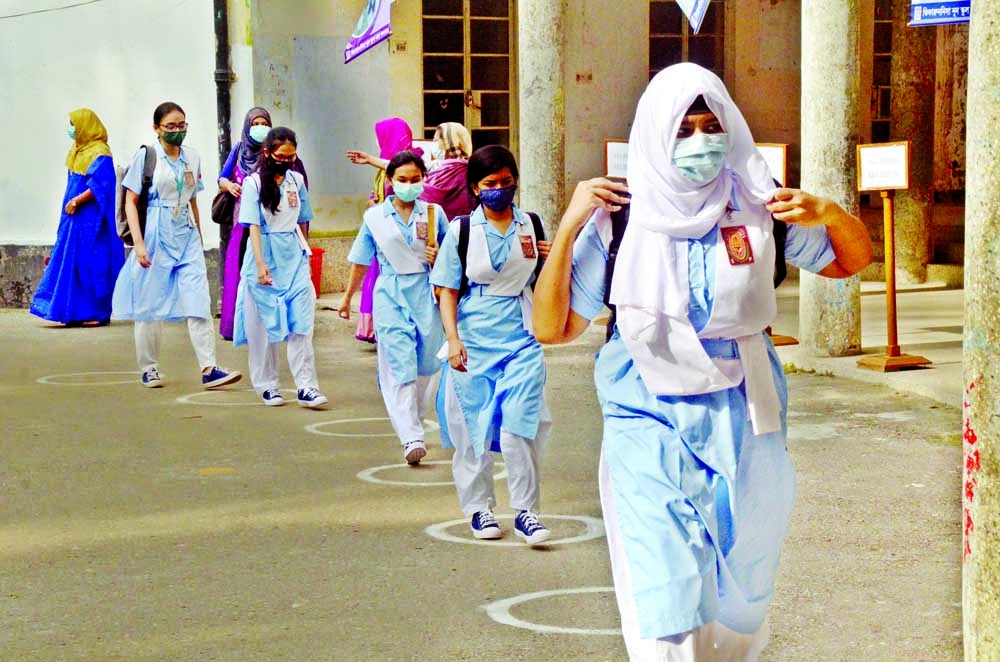 Students enter an educational institution in the capital as schools, colleges across the country opened after long 543 days of closure on Sunday. NN photo

Syed Shemul ParvezÂ  :
The students of schools and colleges in Bangladesh returned to their classrooms on Sunday with much enthusiasm after a long closure due to the Covid-19 pandemic.
On the day, the teachers were welcoming the students at the entrance gate of the institutions. Somewhere, the students were welcomed with chocolate and scattering flower petals.
Though the educational institutions were opened after more than a year and a half, the attendance of the students on the first day was eye-catching.
It has been seen in several areas of the capital that in the morning, the students entered the classroom with respect to the hygiene rules. At that time almost all of them had masks on their faces. Parents were also there.
Regarding the opening of the institutions, the doctors said that in order to keep the educational activities active, all concerned including the students have to abide by the hygiene rules. Otherwise, the infection is likely to increase again.
Education officials say that students have been mentally prepared to maintain hygiene during online classes.
Attempts have been made to make the subject spontaneously part of their daily routine.
At the moment, the teachers are not putting pressure on the students except the examinees. However, there is a kind of inertia among the students when they return to classes after a long time. So at present their mental spirits are being given the highest importance, experts added. Â Â Â  Education officials have visited various educational institutions in the capital since morning. Education Minister Dipu Moni herself has also visited several schools of the city.
At that time Education Minister has ordered the temporary suspension of the principal of Azimpur Girls School and College, Hashibur Rahman, on the charge of finding dirt in a classroom. Besides, Selina Hossain, an officer of the Department of Secondary and Higher Education in charge of supervision, has also been ordered to be suspended.
"From right now, surprise visits will be paid to all educational institutions and the necessary steps will be taken after the observation, Education Minister added.
On the day, parents were also seen happy to send their children to school following the hygiene rules after a long time. They say there is no certainty as to when Corona will be eradicated. The students were out of breath for a long time.
Meanwhile, doctors are also in favor of sending students to school. They said that regular classes should be taken in compliance with the hygiene rules. However, all fears of the spread of corona from educational institutions are not going away now. But, if you follow Directorate of Secondary and Higher Education 's instructions properly, the chances of infection prevention are strong.
Mohammad Rahmat Ullah, Principal of Mohammadpur Kislay Girls School and College in the capital, said, 'In the morning we welcomed the students with chocolates. Almost 100% of the students came wearing the mask. However, for those who did not have masks, we gave them masks.
Abu Saeed Bhuiyan, Headmaster of Government Laboratory High School in Dhanmondi, said, "We measured the temperature and washed the hands with soap to get the students into the school.
First day the average attendance was over 90 percent.
Senior Registrar of Public Health Urban Hospital Tanima Taji Ankhi said, "It is not possible to close educational institutions indefinitely. Corona may last for ten years. But if the school was not opened, the nation would have suffered a lot. It is a positive step to run an educational institution in compliance with the health rules, she added.
Medical Officer of DMCH Iftiyar Irfan told the media that educational institutions have to be opened somehow. All classes are not to be held every day of the week. So all students should not visit schools every day. So, it is possible to follow hygiene rules if you are aware, he added.
Directorate of Secondary and Higher Education wing Director Belal Hossain told the media that "I have visited some schools in the capital since morning. All in all, the management of the educational institutions is satisfactory with regard to hygiene.
We are also taking reports from the branch offices outside Dhaka," field officials had also given us positive information, he said.