As West ponders aid for Afghanistan, China and Pakistan quick to provide relief 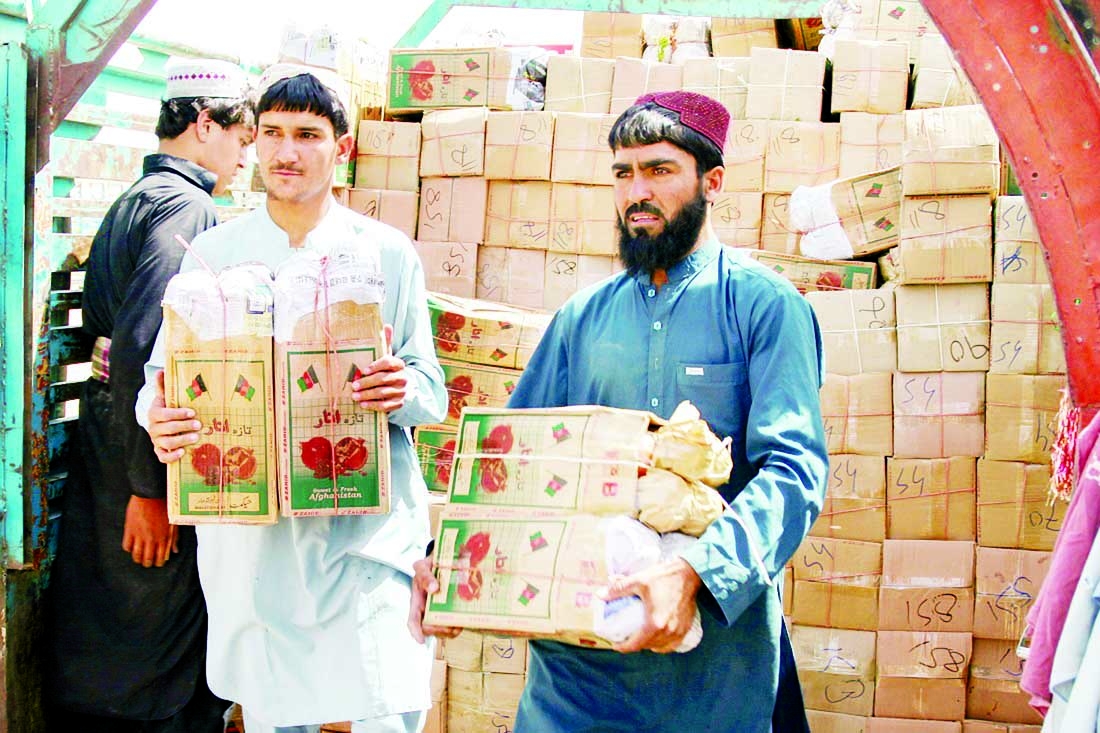 Workers unload boxes of pomegranates from Afghanistan, from a truck at the \'Friendship Gate\' crossing point, in the Pakistan-Afghanistan border town of Chaman, Pakistan. Agency photo

Reuters :
As international donors gather in Geneva on Monday to discuss humanitarian relief for Afghanistan under Taliban rule, neighbours China and Pakistan have already reached out with aid and discussions of future assistance.
The economy in the war-torn country is in crisis and a humanitarian crisis is looming, experts say.
Yet the United States and other Western nations are reluctant to provide the Taliban with funds until the Islamist militant movement provides assurances that it will uphold human rights, and in particular the rights of women.
The country's roughly $10 billion in foreign assets, held overseas, are also frozen.
"The understandable purpose is to deny these funds to the de facto Taliban administration," Deborah Lyons, the UN Secretary General's special representative for Afghanistan, told the UN Security Council this week.
"The inevitable effect, however, will be a severe economic downturn that could throw many more millions into poverty and hunger, may generate a massive wave of refugees from Afghanistan, and indeed set Afghanistan back for generations."
Another possible effect could be to drive Afghanistan closer to its neighbours and close allies Pakistan and China, who have already sent planeloads of supplies to Afghanistan. They have also signalled they are open to ramped-up engagement.
China announced last week it would send $31 million worth of food and health supplies to Afghanistan, among the first foreign aid pledges since the Taliban took power last month.
Pakistan last week sent supplies such as cooking oil and medicine to authorities in Kabul, while the country's foreign minister called on the international community to provide assistance without conditions and to unfreeze Afghanistan's assets.
Pakistan has had deep ties with the Taliban and has been accused of supporting the group as it battled the US-backed government in Kabul for 20 years - charges denied by Islamabad. China, with a strong alliance with Pakistan, has also been engaging with the Taliban. Some analysts said it was enticed by the country's mineral wealth, including large reserves of lithium, a key component for electric vehicles.
China has also expressed concern about militancy that could spill over from Afghanistan across its border, which it wants the Taliban administration to help contain.
Beyond humanitarian aid, some experts and officials in the region say China's huge Belt and Road Initiative (BRI) could provide Afghanistan with long-term economic viability. One possibility is Afghanistan joining the China-Pakistan Economic Corridor (CPEC), a central part of the BRI, under which Beijing has pledged over $60 billion for infrastructure projects in Pakistan, much of it in the form of loans.
"The Taliban would welcome joining CPEC, China would also be very happy," said Rustam Shah Mohmand, Pakistan's former ambassador to Afghanistan.
China has not made any comment on the BRI but Foreign Minister Wang Yi has said Beijing is ready to actively discuss the resumption of China-Afghanistan freight trains and facilitate Afghanistan's interaction with the outside world, especially its access to humanitarian supplies.
Pakistan's foreign office and a Taliban spokesperson did not immediately respond to request for comment.

Taliban leaders in recent weeks have said they want good relations with China.
A senior Taliban source said discussions have taken place with China in Doha about possible investment opportunities. China is interested in mining in particular but any activity in the sector will be open to tender, the source said.
"The Taliban welcomes foreign investment that will benefit the country," he said.
Two sources in Afghanistan and Pakistan familiar with the matter said China had been proactively encouraging Afghanistan to join CPEC for years but had been met with a non-committal response from the previous US-backed government.
The Taliban, with a need for economic stimulus and international recognition, seems more keen.
"The best way forward and the immediately available alternative option for Afghanistan's economic development is CPEC, which includes Pakistan and China," said Mushahid Hussain Sayed, a Pakistani senator and former chairman of the China-Pakistan Institute.
"The new administration in Kabul would also be receptive to this and they are keen on it."
For China, though, which already has mining interests in Afghanistan that have struggled to get off the ground, any further investment would come with risks attached, given the uncertain security situation in the country.
"Absolutely the security and stability of Afghanistan is also of importance to China," said Wang Huiyao, president of the Centre for China and Globalisation, a think-tank.
"But also links to Central Asia and the connectivity through the Belt and Road, it's all related for the regional stability and prosperity...There's a stake there for China."