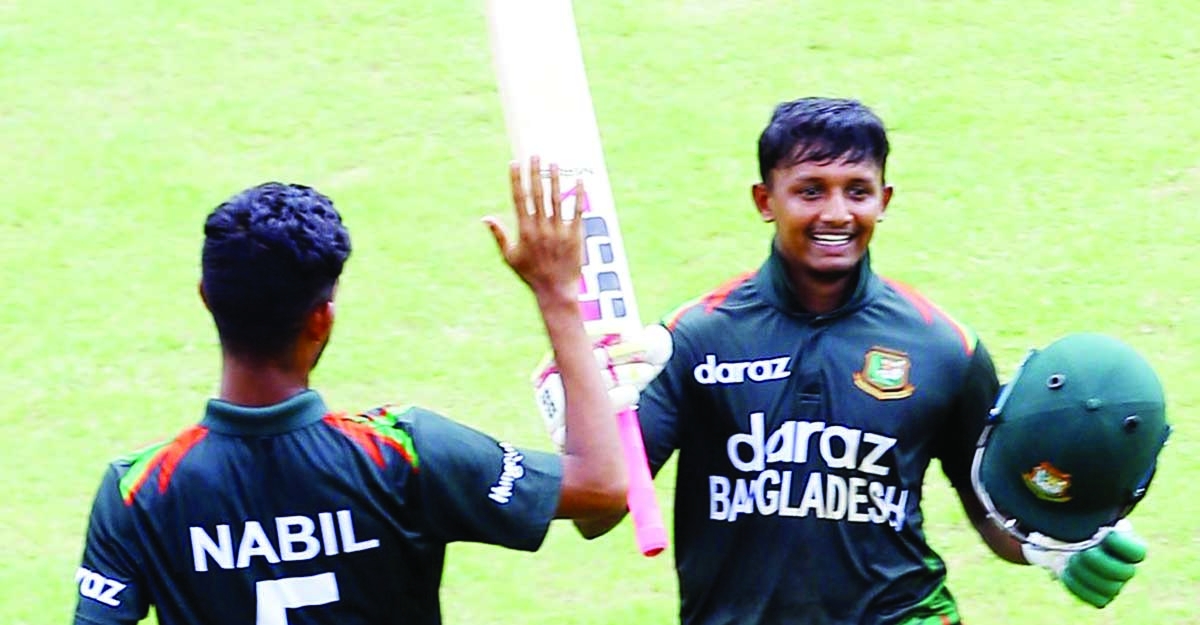 Sports Reporter :
Bangladesh Under-19 Cricket team clinched the one-day series 3-0 with two matches in hand after defeating Afghanistan Under-19 Cricket team by 121 runs in the third one-day at Sylhet International Cricket Stadium on Tuesday.
Electing to bat first, Bangladesh piled up a fighting total of 222 for the loss of six wickets in the allotted 50 overs and then bundled out Afghanistan for 101 off 39.4 overs.
Bangladesh had a sorrow start as opener Prantik Nawrose Nabil (1) was bowled out by Faisal Khan Ahmadzai when Bangladesh's score was only 4.
One-down Khalid Hasan (o) was caught behind by wicketkeeper Bilal Sayedi off Naveed Zadran when Bangladesh's total was six for the loss of two wickets.
Then opener Mofiul Islam and second-down Aich Mollah put on together 61 runs for the third wicket stand before Mofiul Islam was dismissed for 27 when Bangladesh's score was 67 for the loss of three wickets.
Aich Mollah hit a superb 108. His 130-ball innings was ornamented with four sixes and eight fours. Aich Mollah was adjudged the Man of the Match for his outstanding batting performance.
Aich Mollah and SM Meherob (7) contributed together 53 runs for the fourth wicket partnership before Meherob (7) was trapped leg before wicket by Izharulhaq Naved when Bangladesh's total was 120 for the loss of four wickets.
After Meherob's dismissal, Aich Mollah and Tahjibul Islam added together 33 runs in the five-wicket stand before Tahjibul Islam was dismissed for 18 when the hosts' score was 153 for the loss of five wickets.
Later, Aich Mollah and Abdullah Al Mamun contributed together 49 runs for the sixth wicket partnership before Aich Mollah was dismissed when the home side's total was 202 for the loss of six wickets. Abdullah Al Mamun remained unbeaten with 32. He hit three sixes and a four in his 20-ball knock.
Faisal Khan Ahmadzai of Afghanistan was the most successful bowler for his side with three wickets at the cost of 39 runs. Later, the Afghan batsmen failed to face the tight, controlled and superb bowling attack of Bangladesh youth.
Naimur Rahman captured five wickets in the space of 17 runs, while Ripon Mondol grabbed three wickets instead of 17 runs and Ariful Islam bagged two wickets for 23 runs.