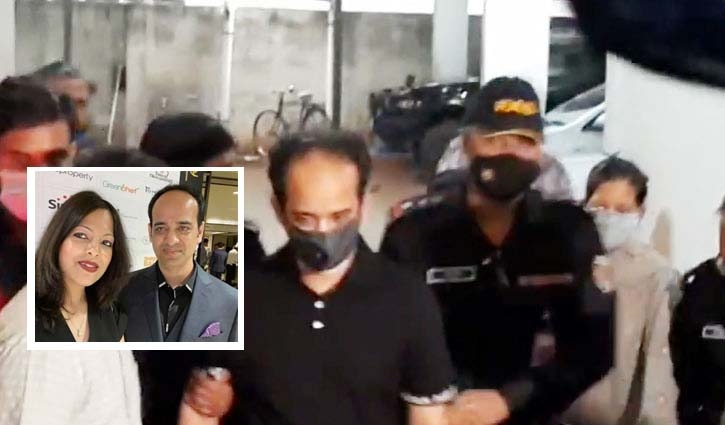 Members of Rapid Action Battalion (Rab) arrested Evaly CEO Mohammad Rassel and his wife Shamima Nasrin, the chairman of the company, conducting a raid on their house at Mohammadpur in the city.
Sources at the Rab headquarters said the elite force members cordoned off the multi-storey building at Sir Sayed Road, Mohammadpur around 3:30 pm and arrested them around 5 pm.
The owners of Evaly, an e-commerce firm, were allegedly involved in embezzlement of several hundred crores of taka. They were arrested after a victim filed a case against them.
Earlier, on Wednesday night, a victim, Arif Baker, lodged a case with Gulshan police station accusing the couple.
Sub-inspector Ahidul Islam, the investigating officer of the case, said the case was registered over the allegation of embezzlement of money and fraudulence.
In the First Information Report (FIR), Arif Baker mentioned that he had ordered goods worth Tk 310,000 online from Evaly from May 29 to June 29 this year. But the firm failed to deliver the ordered goods in time.
Earlier, the Bangladesh Financial Intelligence Unit (BFIU), an arm of the Bangladesh Bank that specializes in financial crime investigations, directed all commercial banks and financial institutions through a common letter on August 27 to freeze all the bank accounts operated by top executives of Evaly.
Media reports said that Evaly has been running business offering its customers unusual cashback offers like 100 percent or 150 percent on advance payment for a product.
E-commerce business experts say no firm can give 100 percent or more cashback against the purchase of a product. It was alleged that when a customer deposited money to buy a product, Evaly took too much time to provide the product.
The Directorate of National Consumer Right Protection, a department under the Commerce Ministry, also received allegations from consumers about âcheatingâ by Evaly.
Bangladesh Bank officials said that one of the major allegations against Evaly is forcing its consumers to deposit their money in the e-wallet of the firm which was totally illegal.