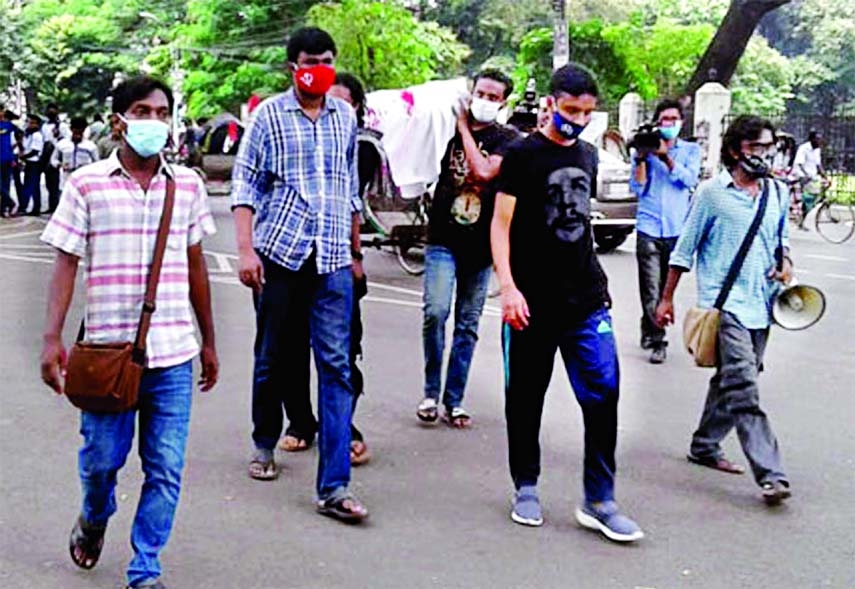 Dhaka University students stage protests on Thursday against the felling of an old Krishnachura and two other trees on the campus.

UNB :
Dhaka University students on Thursday staged protests as its authorities cut down an old Krishnachura and two other trees on the campus.
Some students brought out a procession carrying the pieces of the chopped down trees to exhibit their anger. A group of Dhaka University students planted some new Krishnachura plants at the eastern corner of the Arts Building protesting the cutting down of the 60-year-old tree.
The university authorities claimed that the Krishnachura tree was chopped down on Wednesday morning as it had become riskier for pedestrians with its roots coming out open
Two eucalyptus trees were also cut down at the same location.
The chopping down of the Krishnachura tree has drawn widespread criticisms on social media, particularly from former and current students of the university.
Monirul Islam, a former student of the university, on his Facebook post said: "I don't feel like going to my university campus these days. The gutless people in the university's administration can't maintain the campus properly; rather they cut down trees for their business. This is so disheartening."
Maintenance of all the trees on the university campus, including the plant-beautification of the Curzon Hall and road medians of the campus, are routinely carried out by the Arboriculture Centre of the university.
Prof Mihir Lal Saha, director of the centre, said, "These trees were basically at risk. They were on the road. The trees might have collapsed anytime. So there was no alternative to removing them.Â  We'll plant fast-growing trees at this place."
Asked about the chopping down of the old Krishnachura tree, he said: "The Krishnachura tree was supposed to be straight. But the tree has been tilted and its roots also got damaged. So, it could have been uprooted any time causing an accident. So it had to be removed."