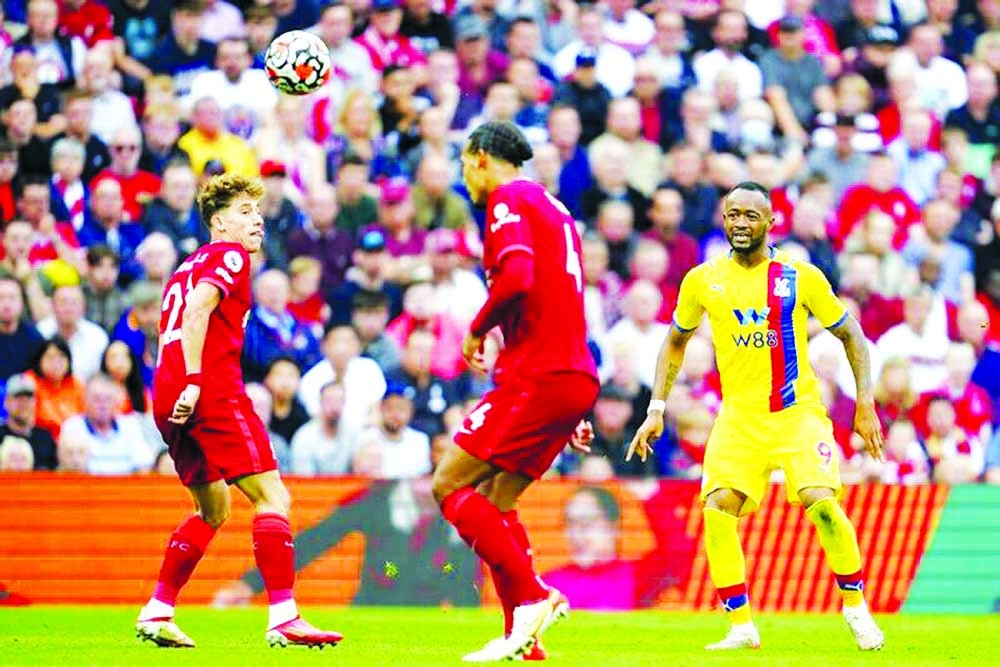 Agency :
Liverpool went top of the Premier League with a 3-0 win over Crystal Palace on Saturday, while champions Manchester City were held to a goalless draw at home to Southampton.
Arsenal picked up their second straight win with a 1-0 victory at Burnley, while promoted Brentford posted an impressive 2-0 win at Wolverhampton Wanderers.
Everton's unbeaten start to the season came to an abrupt end as they crashed to a 3-0 defeat at Aston Villa.
Juergen Klopp's side moved to 13 points from five matches after goals from Sadio Mane, Mohamed Salah and Naby Keita at Anfield.
Liverpool had been well on top against Patrick Vieira's Palace but struggled to turn their dominance into goals until Mane turned the ball in from close range just before halftime for his 100th goal for the club.
His strike followed a shocking miss by Portugal international Diogo Jota, who blazed over the bar from two yards out.
Salah added a second to kill off the contest on 78 minutes as Virgil van Dijk flicked on a corner and the forward supplied a neat finish.
But there was still time for Keita to add a magnificent third when he volleyed into the net from the edge of the box as the clock ticked into injury-time.
"When you win, usually you are really good or brilliant. Today we were not brilliant but we were good," said Klopp.
"We accepted the battle Crystal Palace was here for and that's why I am really happy about the result, really happy about the performance," he said.
City were held to a frustrating goalless draw by Southampton at the Etihad Stadium.
After an uneventful first half where City were well below par, Southampton thought they had been handed a golden chance to go in front just after the interval when they were awarded a penalty for a foul on Adam Armstrong. To make matters worse for City, Kyle Walker was sent off for the foul.
But referee Jon Moss, following a VAR intervention, overturned both the red card and the awarding of the spot kick.
Kevin De Bruyne and Phil Foden were both summoned from the bench as City pressed for a winner, which they thought they had grabbed at the death through Raheem Sterling, but his effort was ruled out for offside.
The result means City fall three points behind Liverpool, on 10 points.
Everton are fifth on 10 points although Rafa Benitez's side were given a reality check as they conceded three times in 10 minutes after the break at Villa Park.
Matty Cash thumped in the opener in the 66th minute - his first goal for the club - before Lucas Digne's own goal from a corner and substitute Leon Bailey's fierce drive.
Martin Odegaard's 30th-minute curling free kick earned Arsenal back-to-back wins although they also had some help from VAR as they hung on for the three points at Turf Moor.
The Norwegian midfielder curled the ball beautifully into the top corner of Nick Pope's goal in the 30th minute, helping take Mikel Arteta's side on to six points
Burnley thought they had a chance of an equalizer when Matej Vydra went down under a challenge from Arsenal keeper Aaron Ramsdale and referee Anthony Taylor pointed to the spot.
But when VAR intervened, Taylor went to the pitchside monitor and overturned his decision after seeing footage showing Ramsdale playing the ball.
Brentford claimed their first away victory in the Premier League with a 2-0 win at Wolves, despite going down to 10 men midway through the second half.
Ivan Toney scored and grabbed an assist in a busy first half in which he also had two goals disallowed. But the visitors were forced to defend for the last half hour when Shandon Baptiste was sent off for a second yellow card.
Brentford are ninth in the standings while Wolves, still seeking their first home win under Bruno Lage, slipped to 16th.