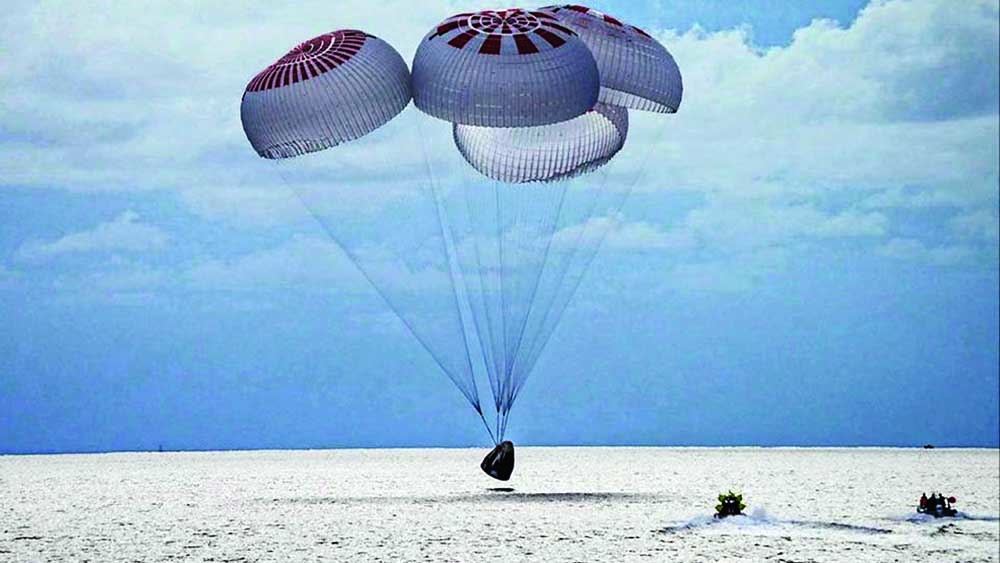 International DeskÂ  :
Four space tourists on board the SpaceX Inspiration4 mission safely splashed down off Florida's coast on Saturday, completing the first-ever three-day mission in Earth's orbit with no professional astronauts on board.
The SpaceX Dragon capsule's heat shield allowed it to withstand the descent, before it was slowed down by four large parachutes and then splashed into the ocean just after 7pm (23:00 GMT), according to a live video feed from the company, reports news agencies.
The return from orbit followed a plunge through Earth's atmosphere generating frictional heat that sent temperatures surrounding the outside of the capsule soaring to 1,927 degrees Celsius (3,500 degrees Fahrenheit). The group's flight suits, fitted to special ventilation systems, were designed to keep them cool if the cabin heated up.
A SpaceX boat raced to retrieve the capsule and allow the four to exit the craft."That was a heck of a ride for us, and we're just getting started," billionaire businessman Jared Isaacman, who paid for the trip, radioed from the capsule moments after splashdown.
SpaceX, the private rocketry company founded by Elon Musk, the chief executive of Tesla electric carmaker, supplied the spacecraft, launched it from Florida and flew it from the company's suburban Los Angeles headquarters.
Isaacman paid an undisclosed sum for all four seats on the mission.
He selected three others to join him - geoscientist and former NASA astronaut candidate Sian Proctor, 51, physician's assistant and childhood bone cancer survivor Hayley Arceneaux, 29, and aerospace data engineer and air force veteran Chris Sembroski, 42.
Isaacman conceived of the flight primarily to raise awareness and donations for one of his favourite causes, St Jude Children's Research Hospital, a leading paediatric cancer centre in Memphis, Tennessee, where Arceneaux was a patient and now works.
After undergoing medical checks at sea, the group will be flown by helicopter back to Cape Canaveral where they blasted off on Wednesday.
Two rival operators, Virgin Galactic and Blue Origin, are also developing space tourism, with their respective founding executives, billionaires Richard Branson and Amazon founder Jeff Bezos, each going along for the ride.
Those suborbital flights, lasting a matter of minutes, were short hops compared with Inspiration4's three days in orbit.