3 killed in UP polls violence 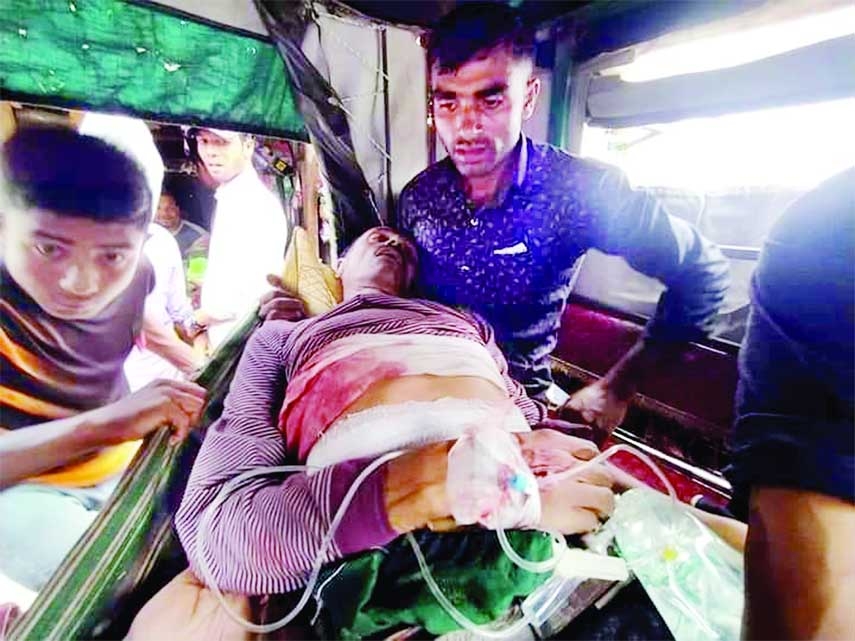 A man is being taken to hospital after being shot in the Kutubjom union parishad (UP) under Maheshkhali upazila on Monday. NN photo

Staff Reporter :
At least three people were killed and many injured, including with bullet wounds, in sporadic violence in some districts during the voting in 160 Union Parishads on Monday.
After the polls began at 8am, clashes erupted in Chattogram's Sandwip, Khulna's Digholia, Bagerhat's Mongla, Cox's Bazar's Kutubdia and Moheshkhali, and Noakhali's Hatia areas.
Meanwhile, 10 candidates boycotted the elections and voting was postponed in four centres so far.
Among the three deceased, 70-year-old Fatema Begum was killed in the violence caused by the opposition candidate's supporters in Mongla on Sunday night.
In Kutubjom union of Moheshkhali under Cox's Bazar, five people were shot in a gunfight that broke out between supporters of Awami League candidate Sheikh Kamal and an independent candidate Mosharraf Hossain Khokon at a polling centre around 11:15 am. Seriously injured Abul Kalam died at Cox's Bazar Sadar Hospital.
At least four people were also injured during the incident. They were taken to the Cox's Bazar District Sadar Hospital for treatment.
Meanwhile in Baraghop Union of Kutubdia of the same district, a man named Abdul Halim was shot dead by law enforcers during a clash at a polling centre
at noon. Voting was closed at Pilatkata Government Primary School and Kutubdia Government College centres. At least 25 people were also injured in the clash.
Kutubdia Police Station Officer-in-Charge Mohammad Omar Haider confirmed that Abdul Halim was injured while the law enforcers were trying to control the situation during the clash at the polling centre. Later he was pronounced dead at Kutubdia Upazila Health Complex.
At least four people have been injured in a bomb blast in Khulna's Digholia upazila during a clash centring election to the Barakpur union parishad.
The incident took place at Uttarpara Government Primary School polling centre in ward 5 of the union around 12 noon on Monday.
The injured are Imran Sheikh, Ahad Sheikh, Kamal Mallick, and Alamgir Mollah.
Digholia Police Station Officer-in-charge (OC) Ahsan Ullah Chowdhury said; "The four people who were injured in the bomb attack outside the polling centre have been admitted to Khulna Medical College Hospital."
At the same time, by-elections are being held in nine municipalities and local government councils of the country.
Earlier, the EC had postponed the elections due to the surge of the coronavirus outbreak.
Electronic Voting Machine (EVM) system is being used in 9 municipalities and in 11 UPs of 160.
According to EC sources, 44 candidates have been elected unopposed for the post of chairman in 160 UPs.
There are about 1,965 candidates in the reserved wards and 6,333 candidates in the general wards.
Meanwhile, out of 9 municipalities, three candidates have won unopposed as mayors at Langalkot in Cumilla, Kabirhat in Noakhali and Boalkhali in Chattogram.
Now 27 persons are vying for the post of mayor.