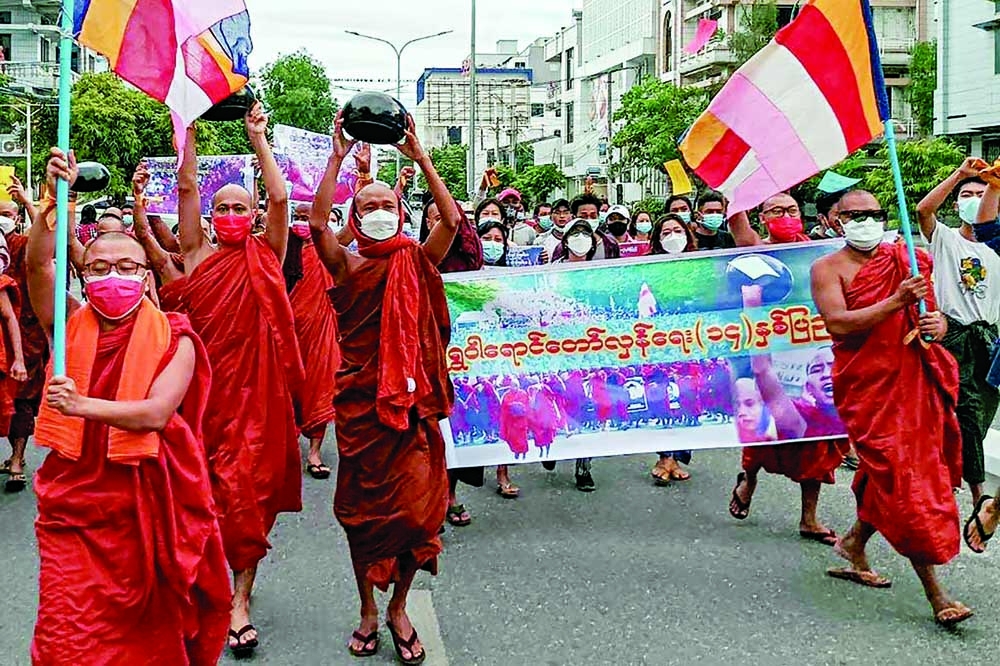 AFP :
Scores of pro-democracy Buddhist monks took to the streets of Myanmar's second-biggest city on Saturday, rallying against the military coup in demonstrations that coincided with the 14th anniversary of previous clergy-led mass protests.
Myanmar has been in turmoil and its economy paralysed since February when the military ousted Aung San Suu Kyi's civilian government, ending a ten-year experiment with democracy.
Around the country an anti-junta resistance has taken root, prompting the military to unleash a brutal crackdown on dissent. More than 1,100 civilians have been killed and 8,400 arrested, according to a local monitoring group.
Historically, monks in predominantly Buddhist Myanmar have been seen as a supreme moral authority, organising communities and at times mobilising opposition to the military regimes. But the coup has exposed a schism in the monkhood, with some prominent clerics giving the generals their blessing and others supporting the protesters.
On Saturday, dozens of monks in their bright orange and crimson robes marched through the streets of Mandalay with flags and banners and threw colourful streamers in the air.
"Monks who love the truth stand on the side of the people," a protest leader told AFP.
The monks chanted for the release of political prisoners including members of Aung San Suu Kyi's political party, which won a landslide in last November's election.
Some monks carried upside down alms bowls-ordinarily used to collect food donations from the community-in a symbol of protest to reject the junta regime, which calls itself the State Administration Council.
"We have to take risks... to protest as we can be arrested or shot at any point. We are not safe to live in our monasteries anymore," a 35-year-old monk told AFP.
In 2007, Buddhist monks led huge demonstrations nationwide against the previous military junta regime-an uprising that kicked off after a sudden hike in fuel prices.
The "Saffron Revolution" posed a severe legitimacy crisis for the then 35-year-old dictatorship, which responded with brutal crackdowns that killed at least 31 people and saw hundreds of monks defrocked and arrested.