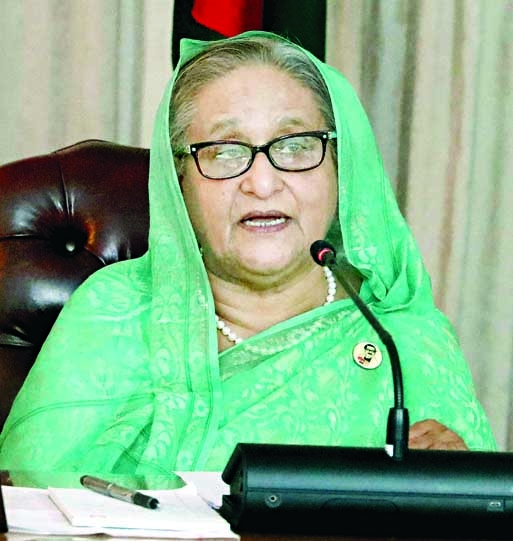 BSS, New York :
Prime Minister Sheikh Hasina has said the people who do not believe in Bangladesh's independence were actually out to tarnish the country's image at home and abroad by hatching conspiracies.
"They're the enemies of the country's people," she told a reception accorded to her by the US chapter Awami League at New York LaGuardia Airport Marriott Hotel here on Friday night (BD time early Saturday).
Joining the reception virtually, Sheikh Hasina, also the AL President, said some elements staying abroad are indulged in plots against the government to taint the country's image at the time when her government has taken Bangladesh to a dignified position.
In this connection, the premier called upon all to remain alert so that none can play ducks and drakes with the fate of the people. Politics is not meant for enjoyment
rather it is for sacrifice, she said, adding Zia, Ershad and Khaleda Zia never thought about the welfare of the people, rather they touted power as "a means for enjoyment and making some quick bucks".
Highlighting country's stunning development in the last one era, Sheikh Hasina said Bangladesh has become a role model of uplift before the entire world due to relentless efforts of her government.
Referring to some elements who are calling the Awami League government as illegal, she said, "My question is that how they get the chance for uttering those words?"
The AL president added they are getting the scope for criticizing the Awami League by taking advantage of 'Digital Bangladesh vision' which was materialized by her government.
"If they had an ideology, they could never do that. They are basically criticizing the government after being paid by the BNP-Jamaat clique," she continued.
In this regard, Sheikh Hasina said military dictator Ziaur Rahman and Ershad came to power by violating the country's constitution, and the court declared their governments as illegal.
She went on saying that Khaleda Zia, the wife of Ziaur Rahman, was jailed for embezzling money of the orphans, while her son (Tarique Rahman) was convicted in the 10-truck arms haul case and the grisly August 21 grenade attack case.
The FBI of the United States had revealed the information regarding their involvement in corruption, she said.
The prime minister said the BNP even had paid money to kidnap and kill Joy (Sajeeb Ahmed Wazed) in the USA.
"But now they are calling the Awami League government illegal," she said, adding the people of the country have voted AL to power, boycotting the BNP.
Sheikh Hasina urged the BNP to take part in the general election if they have faith in people's mandate.
She said Ziaur Rahman had first manipulated the electoral system by holding farcical "yes/no" vote while Khaleda Zia surpassed him with staging the 15th February, 1996 general election as no other political party joined it and the people did not go to the polling centres for vote.
Sheikh Hasina said the information on Khaleda Zia and her two son's involvement in corruption were exposed in Bangladesh and the USA as well.
Her two sons-Tarique Zia and Koko-were convicted for siphoning money off the country while the government had already brought back a portion of it, she said.
"It is their character to lead lavish life abroad by smuggling out money," she added.
When the AL came to power after 1975, the people of the country first realized that the government is for serving the people and for the welfare of the people, the Prime Minister said.
"As long as Awami League remains in power, Bangladesh continues to march forward," she said.
Sheikh Hasina mentioned two reasons of her arrival in New York by a Dreamliner of the Biman Bangladesh Airlines with the first being giving money to the state owned carrier instead of others and remaining the money at our own hand in that way.
The Prime Minister said her government is pursuing a process to resume Biman's operation on Dhaka-New York route.
Sheikh Hasina said, "A section of people are spreading falsehood that sacks or trunks with foreign currency were brought to New York by Biman aircraft".
The Premier asked the rumor mongers to say "where those sacks and trunks to go".
She reminded all that Khaleda Zia went to Saudi Arabia taking 150 suitcases with full of money when she was in power and kept those by hiring lockers there.
She also said (state) minister (for home) of Khaleda Zia's government Babar was netted with several lakhs of dollars in the USA airport and later he was released by intervention of the local Bangladesh embassy.