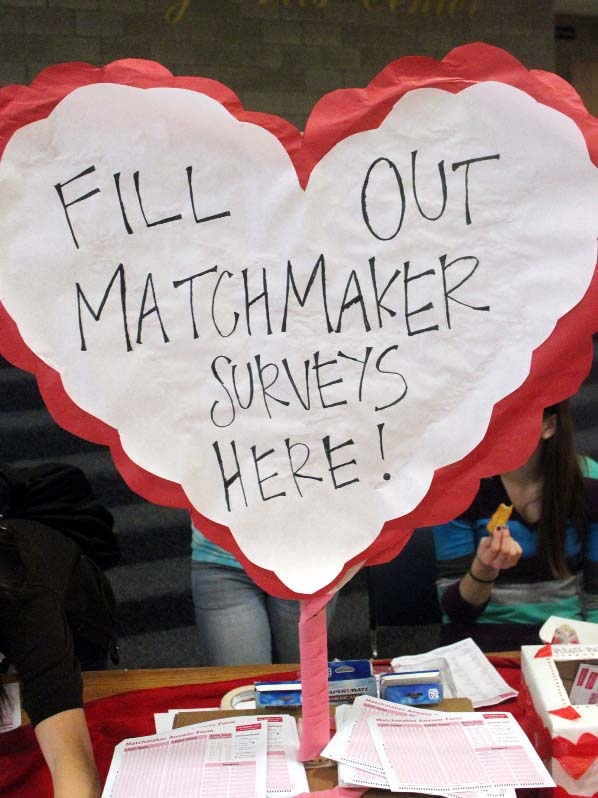 Life Desk :Matchmaking on Valentine's Day could bring more happiness to matchmaker than it does to couples, says research. Matchmaking, a time-honored tradition, brings intrinsic happiness to the matchmaker. To maximize the psychological benefits of matchmaking, you should take care to introduce two people who not only seem compatible but who would be unlikely to meet otherwise, researchers say."At some point, most people have made matches between others - like grabbing two strangers by the arm at a party and introducing them to each other - or can think of a friend notorious for their efforts to make introductions," says Lalin Anik, a postdoctoral fellow at Duke University's Fuqua School of Business. She notes that the rising popularity of social networking websites such as Facebook and LinkedIn has made matchmaking effortless and central to social life.Anik, with her colleague Michael Norton of the Harvard Business School, conducted an in-depth investigation of modern-day matchmaking, examining what motivates us to match others - even when it often goes wrong - and how we can reap the emotional benefits of socially linking others. In four studies, to be presented this week at the Society for Personality and Social Psychology (SPSP) annual conference in Austin, they used surveys, computer games, and in-lab social interactions to show when and why making matches between others boosts happiness.In one study, the researchers asked groups of participants to engage in a brief "get acquainted" task in the laboratory. They then asked participants to pair others in the group: One group of participants had to match pairs that they thought would get along; another group tried to match pairs that they thought would not get along; and a third group matched people on the basis of a random characteristic - their social security numbers. Participants who selected pairs of people who they thought would bond became happier as a result of their matchmaking. Those in the other two groups felt the same as they did before the task.In another study, the researchers created a simple computer game in which participants saw a target face and selected one of three other faces with whom they thought the target would best or worst get along. Once again, the matchmakers had the best experience and were willing to play the game much longer than participants asked to pair people on the basis of mutual dislike.Some participants received monetary rewards for each match made, while others did not. Interestingly, the researchers found that paying people diminished their interest in the game. "Participants who made matches between others for free persisted on the matchmaking task much longer than participants who were offered money," Anik says. These results challenge the rising trend of online social networks providing financial incentives for people to make introductions.Another surprising result of the new studies, published today in the journal Social Psychological and Personality Science, was that matchmaking brings the most happiness to those who pair together two people who are less likely to meet. Making matches between people who are already likely to be members of the same social network, for example, two White women, is not as rewarding as making matches between people less likely to be in the same network, for example, a White woman and an Asian man, Anik says."There are many reasons why people make matches," Anik says. "Matchmakers may be proud that they have the social acumen to recognize a social link that others hadn't." In addition, people may enjoy matchmaking because they view it as an act of kindness. And, of course, "people enjoy being the key person who made that critical match between newlyweds or between business partners who started a successful venture."Future work will further explore the costs to people's emotions and reputations when matchmaking goes wrong: Think of setting up two acquaintances on the worst date of their lives."The study of matchmaking is especially timely now as social structures, as well as definitions of social ties and friendships, are changing," Anik says. "Our exploration of matchmaking can help people to navigate their increasingly complex social webs."In the meantime, this Valentine's Day, Anik and Norton encourage everyone to make matches - romantic and otherwise. They suggest caution as well, however, referencing a past episode of The Office: "In a Valentine's Day episode, Michael Scott introduces Eric - who is interested in tool and die repair - to Meredith - who had a hysterectomy - emphasizing the 'repair' aspect as a common ground. Not surprisingly, the introduction is brutally awkward," Anik says. "Matches should be made with the goal of creating meaningful connections."