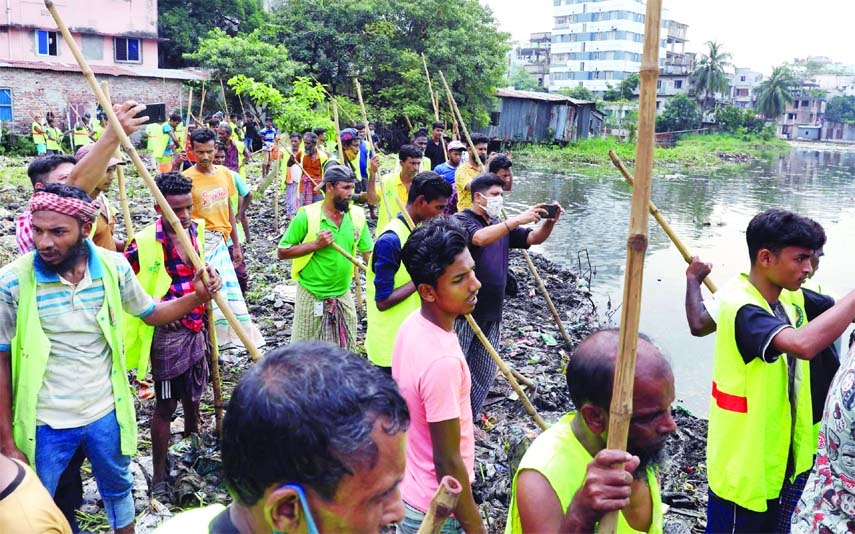 Cleaners of Dhaka North City Corporation conduct a special drive in filthy waterbodies at Khilgaon area in the capital on Saturday to prevent mosquito breeding.

UNB :
As Dengue cases keep rising in Bangladesh 224 more new patients were hospitalized across the country in 24 hours till Saturday morning.
The death toll from the mosquito-borne disease remained unchanged at 73 as no fresh death was reported during the period, according to the Directorate General of Health Services (DGHS). Among them, 68 people died in Dhaka division alone, two each in Chittagong and Khulna divisions and one in Rajshahi.
Among the new patients, 165 were undergoing treatment in Dhaka hospitals while the remaining 59 cases were reported from outside the division, according to DGHS. Some 973 patients diagnosed with dengue fever are receiving treatment in the country as of Saturday morning. Of them, 790 patients are receiving treatment at different hospitals in the capital while the remaining 183 were listed outside Dhaka.
Some 19,918 patients have been admitted to different hospitals with dengue since January.
So far, 18,872 dengue patients have left hospitals after recovery, said DGHS.
The number of dengue patients hospitalized in a single day was the highest with 343 patients on September 7.
In September the country recorded the highest number of 7,841 dengue cases of the current year with 22 deaths
In August 7,698 people were diagnosed with dengue while the highest 34 people died from it, said DGHS.
Meanwhile, a total of 224 more people were hospitalised with dengue infections across the country in the past 24-hour reporting cycle till Saturday morning. In the past 24 hours ending at 8:00am on Saturday, 165 patients were hospitalised in Dhaka and 59 in other districts, said the Health Emergency Centre and Control Room of the Directorate General of Health Services press release. The total number of the hospitalised dengue patients has reached 19,918 since January, according to official data.
The Aedes mosquito-borne viral disease has so far claimed the lives of 73 people - 68 in the capital city, two each in Chattogram and Khulna divisions and one in Rajshahi division - this year. Of the total dead, 12 died in July, 34 died in August, 23 in September and 4 in October, the official statistics showed.
No death was reported between January and June. Of the hospitalised patients since January, 17,004 or 85.37 per cent were reported in Dhaka. In nine days of October, 1,721 patients were hospitalised with dengue across the country. In September, the number of patients stood at 7,841, the highest dengue hospitalisation this year.
The number was 7,698 in August and 2,286 in July. The total number in January-June was 372.
Some 973 dengue patients, including 790 in 46 government and private hospitals in the capital, were undergoing treatment in health facilities across Bangladesh on Saturday. According to the press release, 18,872 patients have recovered from the disease since January.