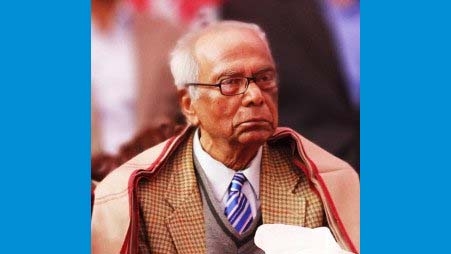 Eminent physicist and 'Bose Professor' of Physics at the University of Dhaka Dr AM Harun-ar-Rashid died at a hospital in Dhaka on Saturday. He was 88.
Dr Rashid, who had been suffering from various old-age complications, breathed his last while undergoing treatment at the hospital.
He received the Ekushey Padak in education in 1991 and the Independence Award in 1999.
Prime Minister Sheikh Hasina expressed profound shock at the death of the distinguished physicist.
In a condolence message, the Prime Minister said Harun-ar-Rashid is not only a physicist but also a dedicated soul in the field of science research.
She recalled his outstanding role in the of physics education particularly the teaching of physics in Bengali alongside his regular research.
Sheikh Hasina said his death created a huge vacuum in the field of science education and research in the country.
The Prime Minister prayed for the salvation of the departed soul and expressed deep sympathy to the bereaved family members.
Dr Rashid was born in a village of Barisal district in 1933. Rashid earned his BSc and MSc in Physics from the University of Dhaka in 1953 and 1954 respectively. He then completed his PhD from the University of Glasgow in Theoretical Physics in 1960.
He joined the University of Dhaka as a lecturer of the Department of Physics. He became a full professor in 1972. He was the founder and chairman of the Department of Theoretical Physics of Dhaka University. In 1993, he was named Bose Professor of Physics. He served as a Professor of Theoretical Physics and director of Institute of Physics, University of Islamabad during 1967â1971.
He served as the Director of Computer Center (now the Institute of Information Technology)in the University of Dhaka.
He was a visiting professor at the Institute fÃ¼r Theoretische Kernphysik, International Center for Theoretical Physics, Imperial College London, University of Texas, Austin and University of California, Los Angeles.