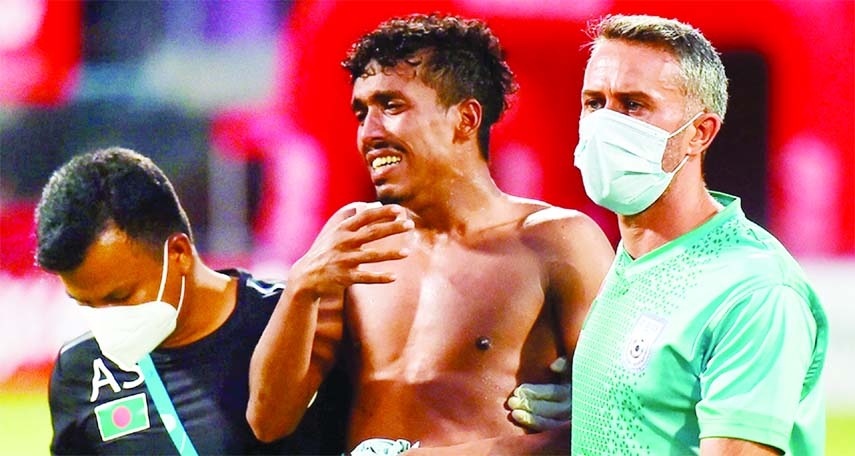 Bangladesh football players and officials in deep sorrow after the team was forced to a 1-1 draw with Nepal in their last match at the International Football Stadium in Maldives on Wednesday.

Sports Reporter :
Ill-fated Bangladesh Football team failed to reach the final of the SAFF Championship as they made a 1-1 draw in their last match of the first phase at the International Football Stadium in Maldives on Wednesday. A controversial decision taken by the referee shattered Bangladesh's dream to reach the final.
Nepal reached the final of SAFF Championship with seven points from four matches, while Bangladesh earned five points from as many matches.
Bangladesh had a 1-0 lead till the 86th minute of the clash but a controversial decision of the referee torpedoed their journey to the final.
Sumon Reza of Bangladesh put his team ahead by a spectacular header using a left-side free-kick from Captain Jamal Bhuiyan in the 8th minute of the clash.
In the 89th minute of the match, Bangladesh custodian Anisur Rahman Zico came out from the citadel to save his team but the ball was touched by his hand. Thus referee showed a red card to Zico and Bangladesh became a 10-man team.
Later, Anjan of Nepal was lightly charged by Saad Uddin in the D-box of Bangladesh. Thus referee awarded a penalty to Nepal which was a controversial decision. Anjan leveled the margin from the spot-kick in the 86th minute of game.
Earlier, Sumon Reza got the goalkeeper alone but he struck the ball straightly to Nepalese custodian in the 54th minute of the match.
Then Bangladesh forward Mohammad Ibrahim's header went over the cross-piece in the 64th minute of the match.
Sumon Reza's long-range shot went wide in the 71st minute of the game.
Nepal got their easiest chance in the 53rd minute but Ananta's header was fisted by Zico.
Bruzon, the coach of Bashundhara Kings - the most successful club in the domestic Â
arena for the last few years - was endowed the responsibility of the national side just a week before the tournament, and they made a good start beating Sri Lanka 1-0 before yielding an inspirational 1-1 draw against India.
They then lost to hosts Maldives 2-0 in the third game.
Bangladesh XI: Anisur Rahman Zico, Bishwanath Ghosh, Topu Barman, Tareq Raihan Kazi, Tutul Hossain Badshah, Jamal Bhuiyan, Mohammad Ibrahim, Biplo Ahmed, Suman Reza, Rakib Hossain, Saad Uddin.
Substitue - Sohel Rana, Matin Miah, Ashraful Islam Rana.