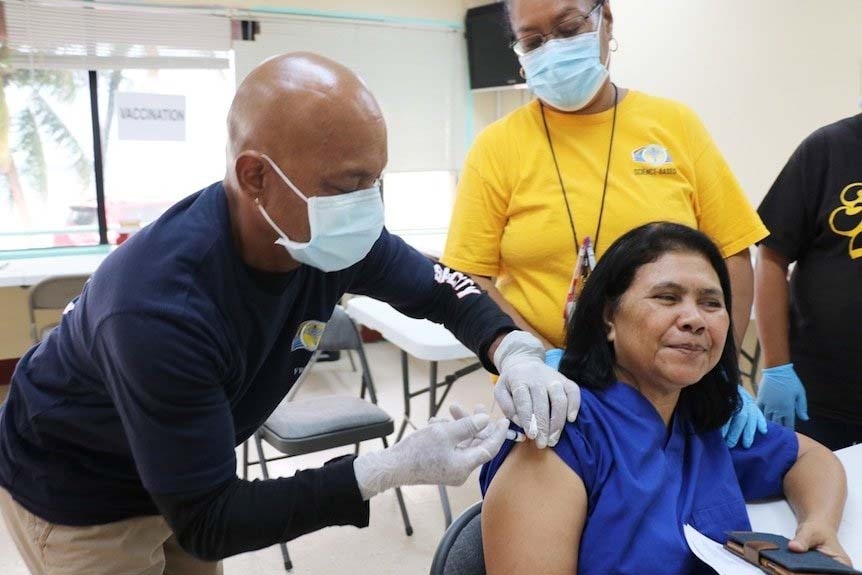 The tiny Pacific nation of Palau has emerged as one of the worldâs most vaccinated places with more than 99 percent of the eligible population fully protected against Covid-19, according to data released Thursday.
In a population of about 18,000, almost 15,000 people have been fully vaccinated, according to the countryâs ministry of health and human services.
The International Federation of Red Cross and Red Crescent Societies (IFRC) said that meant more than 99 percent of the eligible population had been fully jabbed.
In a statement, the health body praised what it said was a âremarkableâ pace of vaccination, but warned that coverage elsewhere in the South Pacific was patchy.
The figures allow Palauâsituated about 1,000 kilometres (600 miles) east of the Philippinesâto âcontesting top spot in the world for COVID-19 vaccination ratesâ according to the IFRC.
In Europe, Gibraltar lists a 119 percent inoculation rate. But that figure is inflated by visitors from Spain who got jabbed while in the British territory.
Palau was one of the few countries to avoid Covid-19 after closing its borders early in the pandemic, despite the huge cost to its tourism-reliant economy.
That record of zero Covid cases was broken in August when two people who arrived from Guam tested positive.
A handful of cases have been detected at the border since then, but there is no widespread community transmission.
During the crisis Palauans have been able to walk into pop-up clinics and receive the Moderna or Pfizer vaccine, and have done so in theirâ relatively smallâdroves.
The focus is now turning to administering third dosesâwhich more than 500 people have already received.
âIt is important to celebrate the success of reaching high vaccination rates in many Pacific countries, including Palau, Fiji and the Cook Islands,â Katie Greenwood, the head of the IFRCâs Pacific office, said.
Though she added that it was âcritical that we try to get everyone vaccinated ahead of the cyclone season, which threatens to damage homes and infrastructure, stretching resources and services needed to contain Covid-19â.
New Zealandâs National Institute of Water and Atmospheric Research has estimated there could be up to 12 tropical cyclones in the Southwest Pacific between November and next April.