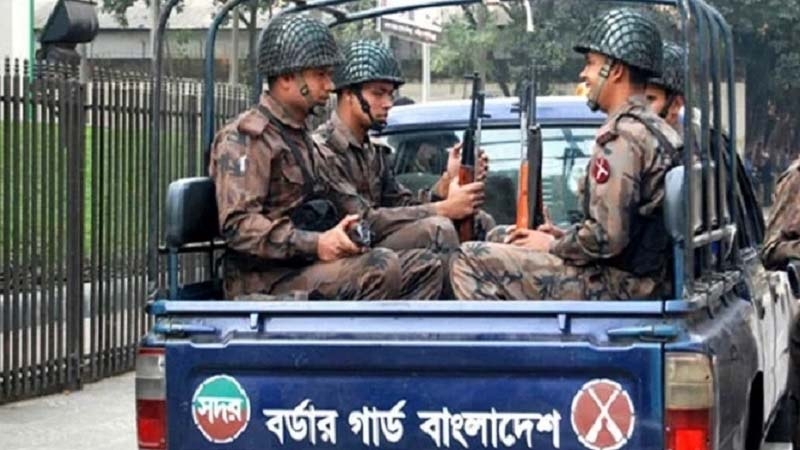 Amid the escalating tension over the Cumilla incident, members of Border Guard Bangladesh (BGB) have been deployed in 22 districts, including Chattogram, Cumilla, Narsingdi and Munshiganj districts to assist the civil administration.
The BGB troops have been deployed following the demand of local administrations and as per the directives of the Home Ministry to ensure security during the ongoing Durga Puja celebrations across the country, said BGB Director (operation) Lt Col Foyjur Rahman.
âBGB troops will be deployed in Dhaka too, if needed,â he said.
Earlier, eight platoons of BGB members have been deployed in different parts of Chattogram district to maintain law and order in the wake of tension triggered by desecration of holy Quran in Cumilla.
The BGB troops were deployed around 9 pm on Wednesday and they will remain out there till October 16, said deputy commissioner of Chattogram Mominur Rahman.
The incident occurred on Wednesday when the Hindu devotees are celebrating Durga Puja, the largest religious festival of the Hindu community in Bangladesh.
Sources at the local administration said two platoons of BGB troops have been deployed in Hathazari and Banshkhali upazilas each, one each in Patiya, Sitakunda, Fatikchhari and Chandanish upazilas of the district.
Meanwhile, Awami League General Secretary Obaidul Quader has warned that those involved in the Cumilla incident will be brought to justice and no offender will be spared.
âItâs an act of an evil communal force, and those who attack Hindu temples wonât be spared either, even if they belong to any party,â Obaidul Quader said while addressing the Mahastami (8th day) of Durga Puja at KIB premises in the capital on Wednesday evening.
He said a united resistance has to be built against those who want to destroy the communal harmony in the country before the national election.
Besides, State Minister for Religious Affairs Md Faridul Haque Khan has urged the people of the country to exercise restraint and not to take law into their own hands over the reported desecration of the holy Quran in Cumilla.
âDonât take law into your own hands. Everyone should maintain religious harmony and peace,â he said in an emergency announcement on Wednesday evening.
âWeâre closely monitoring the situation in Cumilla. The local administration has been instructed to investigate what really happened [there].â he said.
âAnyone involved in destroying religious harmony [in the country] must be brought under the ambit of law and arrangements be made to give proper punishment,â the state minister added.